Free-Choice Video Games With Secret Important Messages About Our Society 2019? 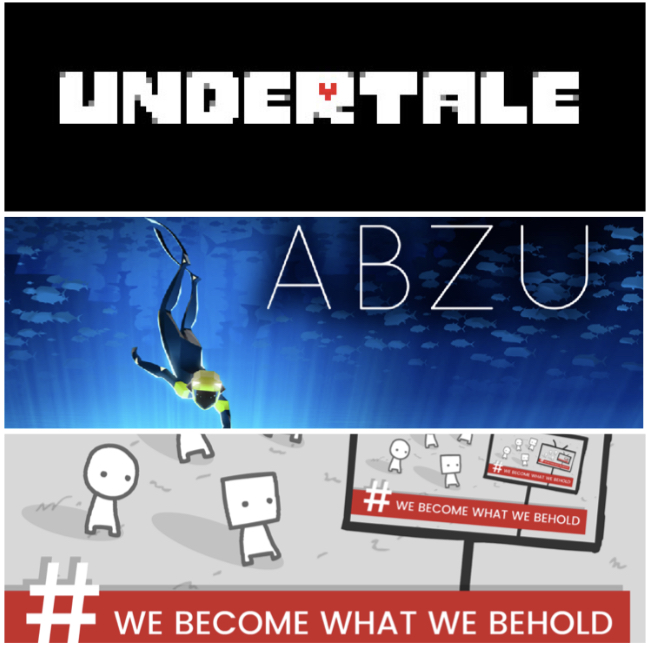 Free-Choice Video Games With Secret Important Messages About Our Society 2019?

SPOILERS ALERT I spoil the endings of the games listed below because it’s where the message lies. So if you haven’t already played through these games and don’t want to be spoiled, DO NOT continue reading.

Although it is my interpretation of the meaning, I contain many parts of the game’s ending in order to explain that.

Most video games nowadays are simple and don’t have any other purpose than to entertain gamers. Made solely for amusement and pleasure rather than to convey an important with it’s wide range of audience.

However, there are games out there that do in fact provide an important societal message to their audience to be aware of.

These three games that I have listed are the only ones I personally know (so if you know others, please be comment down below):

We Become What We Behold

This online game created by Nicky Case shows the true influence that the news media has on us.

Using our negative emotions to incite in political wars with fear and hatred. Putting the gamer in the hands of what it’s like to be a newsperson, taking pictures of a small crowd on what seems to be “interesting”.

However, every time you take a picture of something that isn’t very newsworthy, the story remains constant and doesn’t go anywhere. Much like this quote “Peace is boring, violence goes viral.” The true meaning of the game isn’t until you start anger within the circles and the squares.

That representing our different races in society. The game then takes a very dark and brutal turn, leading to complete chaos and destruction in the little crowd.

(My view on the message) Message: The influence of the news and media can negatively impact our society and cause a great amount of fear, hate, anger, war, and violence.

Here’s a link to the game if you want to check it out for yourself (if you haven’t already): https://ncase.itch.io/wbwwb

This indie video game starts off the player as a child who has fallen into the Underground and encounters many monsters in hope to get back to the surface. Designed to look like an 80’s GameBoy video game for the simplistic aesthetic.

During your journey, you will have to make many choices during your mini battles with the monsters or enemies.

With most gamers being automatically pulled toward the attack/kill side since that is the way most RPG games are set up.

Most RPG games will convey the message that violence is okay, but not in this case. In Undertale, you are offered with three choices: to attack (kill/violence), give mercy (peace), or to flee (weak/coward). And each of these outcomes will affect the way the story ends in the final battle and will finally learn the full truth of the game.

(My view on the message) Message: While in most games players get rewarded for their violence with gold, EXP (Experience), HP (Health Points), and higher LV (Level), those are all just material items.

Giving mercy to enemies and creating a peaceful environment where everyone can feel comfortable is much more valuable.

Even when you don’t get rewarded for gold or extra points to level up. However, when you give mercy, those enemies now become friends that you can depend on in the future.

“The pain you have inflicted on others”

“A way of measuring someone’s capacity to hurt”

GiantSquid Studios has released their new game ABZU August 2, 2016, and various other famous game titles as well. However, I feel that out of all the games, ABZU has the most important message, that message of protecting our wild-life in the ocean.

However, what even is the meaning of the word “ABZU”?

Research shows in original Cuneiform, Sumerian, or Akkadian, “Abzu” means “freshwater from the underground aquifers [that has] a religious fertilizing quality…”

Which fits the theme of the game since at least 95% of the game, you are exposed to the ocean and basically almost swim the entire game.

In the game, the main character seems a female diver who may be part robot since along the gameplay, you find more robot friends to explore the ocean. Journeying ancient ruins and discovering beautiful ocean wildlife myths.

The diver later finds parts of the ocean that seems to be an ancient destroyed civilization. Led by a great white shark, you discover all the answers to all the questions and mysteries we had about the game. Starting with the ruins.

However, one thing that remains constant throughout the game is that the ocean looks something is missing. Most parts of the ocean greenish or grey, lacking the proper health to cleanse itself with most sea creatures looking unhappy and confused.

Theory shows that the diver’s society (who may be part robot) has been preserving the ocean for selfish needs which explains why the sharks tried to kill them.

Basically destroying all these sea creature’s home leaving them to remain hidden in a secret ancient civilization temple for protection from our kind.

(My view on the message) Message: Sometimes we may not realize that our simple-minded, yet selfish actions are actually killing and destroying someone else’s home…

Thank you so much for reading! Comment down below any free-choice video games that also convey an important message that I may have missed.