‘Parasite’ All Meanings and Hidden Clues and Messages 2020 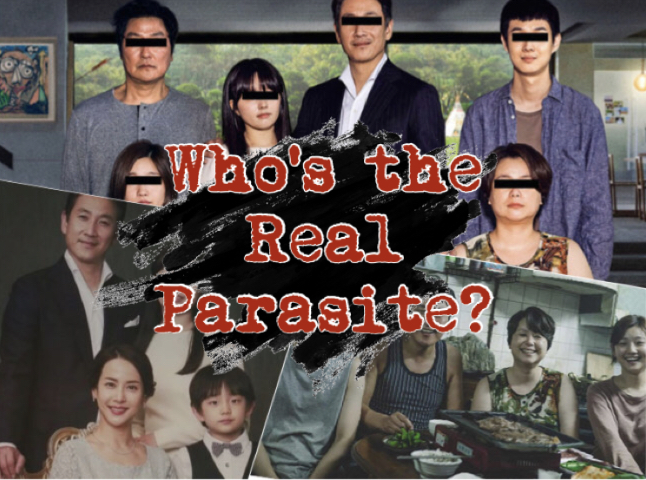 ‘Parasite’ All Meanings and Hidden Clues and Messages 2020

SPOILERS ALERT if you had not already watched the Parasite movie and wish to NOT be spoiled, do not continue reading on!

Parasite, the award-winning, oscar-nominated, Korean film by Bong Joon-ho released October 5, 2019, has gotten much recognition for its many important messages on our modern-day society. This thriller, drama, and original film explores many themes of social class and discrimination among society, that most will fail to recognize.

A compelling story on the Kim family’s journey on gaining wealth and power by taking over the Park family’s home.

This movie makes it unclear to which side of the family is truly the real “parasite”. Well based on recent interviews, it seems that Bong Joon-ho wants the audience to first think that the parasites are the Kim family members.

But after watching the film multiple times, it just isn’t clear anymore. With either side of the Park or Kim family being the “parasites” who (metaphorically) feed on each other without the benefit for the host.

I feel that Bong Joon-ho had purposely set up his film to be divided into different ‘acts’. The first act being the introduction of the ‘parasites’ beginning to slowly one by one replaces every employee in the Park family… and just when everyone thinks there plan will succeed and everything is going well:

Act 2 begins, with the conflict and return of the former maid. Ever since the maid (Moon-gwang) returns, the film slowly takes a new uneasy turn, with the introduction of the new basement bunker… a new feeling of sudden curiosity emerges, as the camera moves and takes sharp turns as Moon-gwang continues down the weird twister stairway to the secret bunker.

There we discover a new secret, that Moon-gwang had been keeping her husband hidden in the mansion and feeding him occasionally. With this, the Kim family realizes that they weren’t the only ones who were taking advantage of the clueless Park family.

However, rather than teaming up with them in exchange for trust and friendship, Choong-sook (Kim family mom) decided to threaten her, as she didn’t want to admit the fact that she was a commoner like them.

This backfired horribly, as the remaining hiding members of the Kim family fall down their hidden spot, exposing their identities. From this point on, the movie never feels the same. With a disturbing feeling where you don’t really know who to trust or who’s the good or bad guy.

Making this movie spectacular, introducing three-dimensional characters with different motives, as real human beings are by nature. Yet, the movie never fails to continue this anxious, disturbing path of finding new surprises along the way.

In fact, the film even begins to grow more and more violent with the Kim family and Geun-sae (Moon-gwang’s husband) fighting for power and wealth. Even holding Moon-gwang and Geun-sae hostage, tied down in the bunker to keep their fake lives.

This doesn’t last very long, as Moon-gwang actually dies from a concussion from being pushed down the stairs by Chung-sook. Causing Geun-sae to grow furious and vengeful on the Kim family for killing his wife.

Act 3 most likely begins at the Park family’s sons (Da-song) birthday party. During this sequence of events, the whole Kim family is invited to “work” for extra pay to make their son’s birthday more extravagant. Being Native American themed… which may represent how many wealthy and ignorant families will use other people’s cultures for fashion or decoration.

Just as the Park family would literally pay Ki-taek (Kim family father) to mock the ancient cultural dancing rituals and a fake an intense battle.

Yet, this particular scene may also represent the fact that like parasites invade their hosts without their benefit, conquistadors would colonize the New World, inhabited by Native Americans. Just like how the Kim family had “colonized” and taken over the already inhabited home of the Park family. 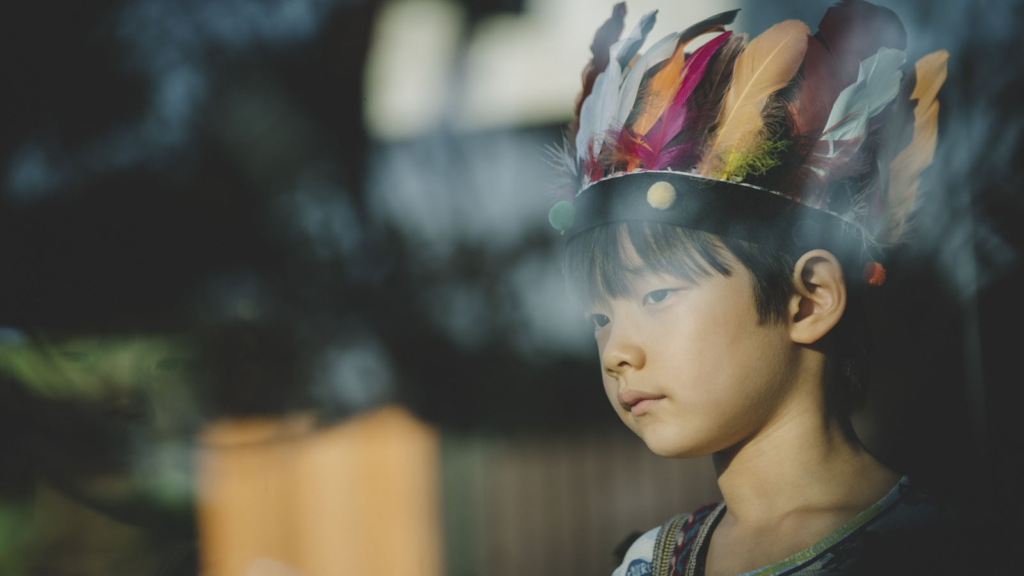 Anyway, the film gets more intense as it begins to reach its climax. Following the escape of Geun-sae, as he longs for revenge on the Kim family. Climbing out of the bunker, he kills his first victim, Ki-woo, who apparently brought the rock as a peace treaty or truce between the family conflicts.

But Geun-sae doesn’t stop there, instead, he rushes to his next victim, and grabs a knife to kill Ki-jeong. Frightening all the other party members and the Park family. Everyone quickly rushes to escape, either heading to their cars or some other escort. All completely ignoring the fact that two “workers” had just been brutally murdered.

But, Ki-taek and Choong-sook quickly break character to rush in an attempt to save their dying daughter. Yet, Dong-ik (Park family father), shouts at Ki-taek to bring him the car keys so he and his family can leave the scene, ignoring the fact that one of their beloved employees had been killed on their front lawn.

This enrages Ki-taek even more, as he grabs the Geun-sae’s knife and plunges it to Dong-ik’s heart, killing him immediately.

Thus Act 4 begins. Reality begins to set in again, with the fall of the Kim family and the death of Ki-jeong and their missing father. Somehow Ki-woo managed to live from that brutal concussion but has gone crazy.

So now only Ki-woo and Choong-sook remain in the Kim family, without them knowing the whereabouts of their father. Returning to their humble beginnings in their old home.

Ki-woo one day visits the Park home again, now inhabited by a new family, realizing that his father had hid in the bunker in fear of the authorities.

So Ki-woo excitedly returns home, writing a letter about never losing hope, that Ki-woo would raise enough money so he could buy the Park home and that his father will someday walk up those stairs… However, the camera transitions to Ki-woo still at the old home with no way of sending that letter to his father. Crushing every lats hope we ever had in the Kim family…

Throughout the film, there are various symbols that each have a significant meaning. Each symbol providing a greater depth to the overall theme of the movie.

In the beginning of the film, Ki-woo’s colleague friend gives him a rock. At first, most viewers find the rock as a useless item or decoration.

But Ki-woo then uses the rock as a peace treaty with Moon-gwang and her husband. Instead, Geun-sae uses the rock against him to almost kill him, using it as a weapon of some sort.

Home and stair architecture in the home also represents a big function of the theme. With stairways going up being wealthy, working up the social class and going down the stairs.

But going down the stairs won’t represent the decline of social status and class. With clever cinematography, so you would only see the Park family members going up the stair but never going down…

In fact, even many talented artists have even made tributes to the film and Bong Joon-ho:

This which I believe perfectly displays the conflict and symbol of the “stairs” and social class. With the Park family rising the stairs and the Kim family following downstairs. Even though the remain and work in the same home. This artwork created by Andrew Bannister for an Alternative UK poster. A parallel universe in which both families seek to live in and “use” the other source without the benefit from them. Like a parasite would do to its host.

Dong-ik had always made a statement on the Kim family’s scent, and how they smell like something from the subway…

With flies surrounding their scent, since they were in poverty. However, in Dong-ik’s last dying moments, a fly lands on the tips of his hand. Meaning that once you’re dead, we’re all the same no matter rich or poor. Dead corpses smell bad…

The film makes it obvious that the Kim family home is practically in the sewers. Foreshadowing this many times, with the downpour of water and dirty toiletries. However, as the Kim family makes their way home one day, there is a heavy downpour of rain that causes everyone in their community to flood their homes with sewage water.

Giving the Kim family much trouble and tremendous torture in trying to recover a few of their items. The Park family, on the other hand, were thankful for the heavy rain, even though it caused their camping trip like it was nothing.

So Ki-taek could barely hide his emotions and true feelings of how much they suffered last night prior to the rain.

Only the children of the Park family seem to have genuine concern and trust in the Kim family. With Da-song having close relationships with Ki-jeong (Jessica) and the Geun-sae (the man in the basement) and Da-hye having a romantic relationship with Ki-woo.

Unlike both parents, the kids of the family seem to be more open and genuine with their feelings towards each other, regardless of wealth or social class.

Thank you so much for reading! Comment down below any hidden themes or messages I may have missed.