BTS (방탄소년단) History/Backstory of How Each Member Started Out 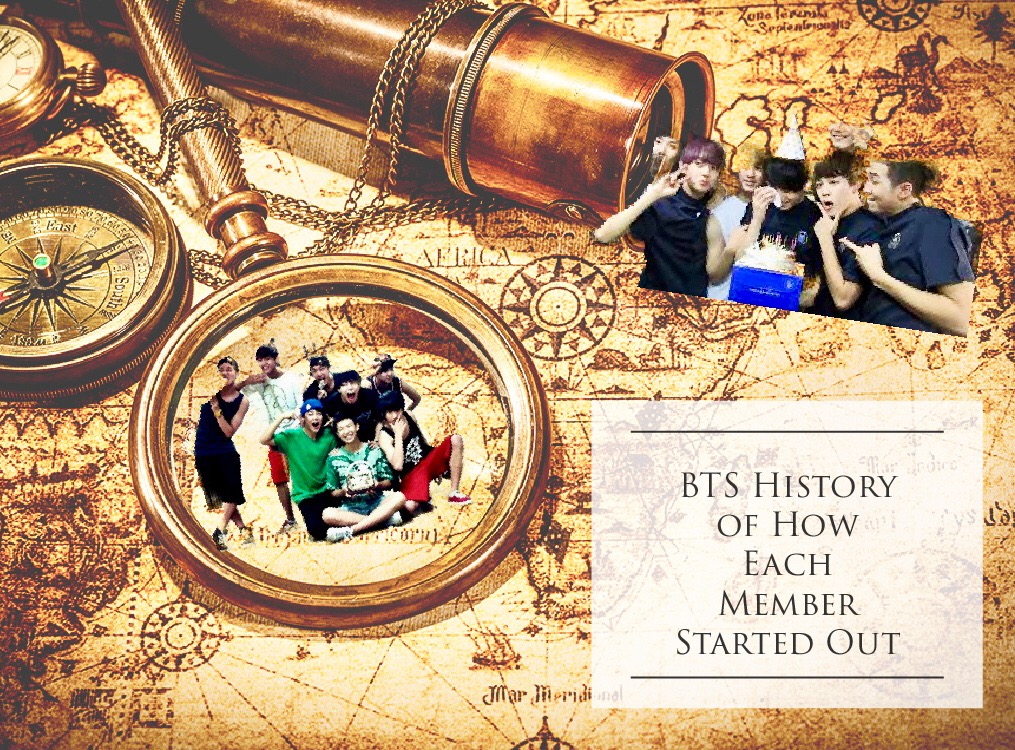 BTS (방탄소년단) History/Backstory of How Each Member Started Out

Ever wonder how each member of BTS (방탄소년단) started out, or at least where they came from.

Started out with only about 300 fans, and now more than 16+ million fans worldwide.

BTS made a cameo in JoKwon’s “I’m Da One” Official MV.

Some as backup dancers and others as actors.

Check out live shows of JoKwon’s “I’m Da One” to see more dancing from J-Hope and Jungkook.

Now onto each indidual member and how they got to be a part of BigHit’s Bangtan Sonyeondan:

First member in 2010 that auditioned for BigHit as the first official member of Bangtan Sonyeondan.

He has an IQ of 148, having scored in the top 1.3% of the nation in the university entrance examinations for language, math, foreign language and social studies.[6] RM is fluent in English, which he learned with his mother as a child and through watching Friends.[7][8] He has described himself as an atheist.[9]”

Additionally, Jin’s father is CEO of Samsung and mother is Miss South Korea. Jin comes from a fairly rich family to attend many acting classes as a kid to potentially become an actor. (But we know how that turned out)

“Before joining the band, Jin intended to work at his father’s company. His father is CEO of a company. However, he was scouted on the streets due to his otherworldly appearance.

Due to his good looks, Jin was first scouted by one of the biggest talent agencies in South Korea, SM, but he refused to join the agency thinking that it was a scam and that the person approaching him was lying.”

“Min Yoon-gi was born on March 9, 1993, in Daegu, South Korea.[2] The younger of two sons, he attended Taejeon Elementary School, Gwaneum Middle School, and Apgujeong High School.[3] By the age of 13, he began to write music lyrics and learned about MIDI. He worked a part-time job at a record studio by the age of 17. From then on he began composing and arranging music, rapping, and performing.[2] Prior to being signed, he was active under the name Gloss as an underground rapper.[4] As part of the hip hop crew D-Town in 2010, he released a song titled “518-062” in commemoration of the Gwangju Uprising.[5]”

Besides that, Hoseok also made an appearance in JoKwon’s “Animal” stage as a featured rapper in 2012.

“Before debuting with BTS, he was part of the underground dance team Neuron.[3] J-Hope had been relatively well-known for his skills in dance prior to his debut; he won various local prizes for dance, including placing first in a national dance competition in 2008.[3][4] His skills in dance eventually led him to gain interest in singing and rapping, helping motivate him to audition as an idol trainee.[2] As a trainee, J-Hope was featured as a rapper in Jo Kwon‘s song “Animal”, which was released in 2012.[5]”

Jimin auditioned into BigHit for dance. Furthermore, prior to the audition, Jimin has been in a contemporary dance academy to portray the art of dance.

“When he was a child, he attended the Busan’s Hodong Elementary School; later he was a top student at Busan High School of Arts.

Jimin became interested in a singing career after watching one of Rain’s performances. After his dance teacher recommended an audition, he auditioned for Big Hit Entertainment.

After moving to Seoul, he began attending Korea Art School with V, where they graduated in 2014.”

“As a young boy, Taehyung and his family weren’t the richest of the group, instead he was told he would have “become a farmer boy’s for his grandma” if he hadn’t gotten into that audition for BigHit.

In 2016, V made his acting debut with a supporting role in KBS2‘s historical drama Hwarang: The Poet Warrior Youth under his real name.[7]”

V is often described as a family man; he notes having a very pleasant childhood and is extremely close to his family.

was inspired by many Korean and American artists to become a singer.

He began his entertainment career at the Korean Arts High School in Seoul, graduating alongside group-mate Jimin (Park Ji-min) in 2014.”

“Jungkook holds a black taekwando belt . He learned break dance in fifth grade. In 7 th year Jungkook learned B-boying in a club where he went with his friends.

After graduating in February 2013, he was unable to attend high school due to his early preparation. He graduated from a performance high school in Seoul in March 2014, a year later.

He is currently studying at Global Cyber ​​University in the Department of Broadcasting and Entertainment .

When Jungkook was younger, his dream was to become a badminton player . During his first year of high school, he finally decided to become a singer listening to songs from G-Dragon (including HeartBreaker ).

At the age of 13, Jungkook participates in an audition called Superstar K3 . However, he was eliminated before the final elimination round because of the “lack of emotion in his dance” according to Bang Si Hyuk PD, CEO of BigHit . However, he receives offers from eight different talent agencies on the way home ( JYP , Cube , Entertainment , Big Hit Entertainment , Starship , FNC, Woolim) 2 . He decides to choose Big Hit Entertainment , where his future comrade RM was also a trainee; to see him in person was the reason for his choice for this company 2.

In 2012, at the age of 14, he was sent to Los Angeles and trained in a famous dance academy [Laquelle?] Where he learned several types of dance including urban style, Movement Lifestyle , feminine style. and various other styles.”

Ultimately, BTS had a pretty rough beginning, starting a Kpop group in a smaller company (BigHit) than most other Kpop groups. But now it’s 2018 and they have become the world’s biggest Kpop group with more than 94+ Awards. Plus they have the world’s greatest fandoms (ARMY).