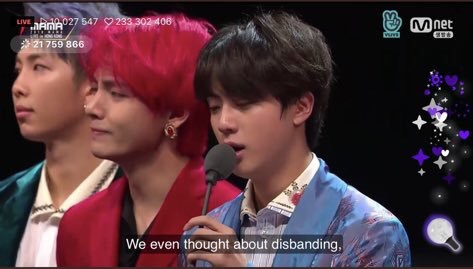 This year’s 2018 MAMA in Hong Kong definitely mad wan impact to the Kpop Industry with various performances from many well known artists as well as an internation guest star Janet Jackson.

BTS especially as they won this 2018 “Artist of the Year” Daesang. With many success BTS has been through with the Time’s magazine cover as most influential person to many awards given to them throughout the year, many people have considered BTS as the biggest boy band in the world.

However, due to this year, BTS has been through much stress trying to balance their lives and keep the name of “biggest boy band”.

The fact that the eldest Member Jin has spoken about it during their acceptance speech just makes it heart breaking for many fans to hear.

We will never truly know what goes inside the head of these boys. But we can only show them love and support all that they do to know that they are not alone.

Since ARMY’s all of the world are the reason that BTS has even considered to stay together as a band and not disband. 🙂