BTS and BigHit (Possible) Update for March 2019 and Beyond 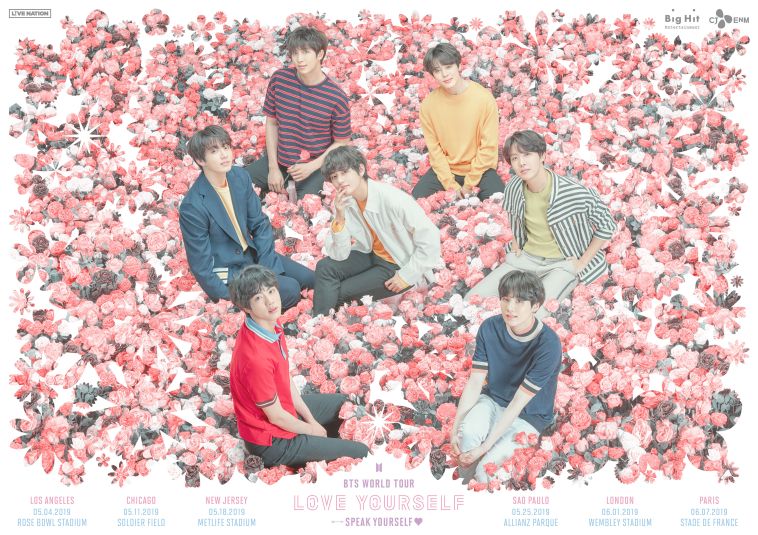 BTS and BigHit (Possible) Update for March 2019 and Beyond

Barely two months into 2019, and BTS and BigHit have released so much since the Grammys. From possible collaborations, new comebacks, world tour pre-sale, and their many toys and games.

First off, let’s start off easy, that being Yoongi’s birthday being on March 9, so let’s celebrate his 25 birthday together!

Second, Suga might release a possible AugustD pt.2 as a present for us.

Now, if you didn’t already know that BTS released a cosmetic set, you might be a little behind or new to the new fandom. However, you can easily purchase some for yourself:

Love Yourself Tour in Seoul now on DVD

With BTS debuting TWO movies, first being Burn the Stage and now the Love Yourself Tour in Seoul, now these two movies will made into DVD’s to be watched again for your pleasure.

Recently, BTS has announced their LY:Speak Yourself Stadium World Tour, last week, which goes on sale March 1st, at 10am, so check to see if it’s available your country!

But if it may not be in your country, don’t be too upset, because these are only the first half of 2019, so more dates will come.

That being said, with a new world tour, that means their next comeback has to be late April or even earlier. Possibly from April 22 through April 30 for a time frame.

BTS Smeraldo Books “Save Me” release

Also if you’re one of the ARMYs who are lost with the theory, here’s a link to help before purchasing the Notes:

If you are sick of playing with your regular, boring Uno cards, then you should buy the BTS original addition to the Mattel family. Releases May 1, 2019.

Similar to Barbie Dolls, since they’re made from the same company, now you can buy a BTS Mattel doll to play with, rather than a Ken doll. Also releases on May 1, 2019.

Check out the link below to see the dolls for yourself for future purchase:

These dolls are suppose to be released April, 2019, so only about a month to get them.

Which was supposed to be released last year will now release (supposedly) this year, but who knows when.

A new program announced a few days ago, which ARMYs can receive points through a puzzle treasure hunt, more info on the website: https://www.armypedia.net/

Now if all of this news didn’t already blow you completely away, remember it’s only February, so who knows what else is to come. BTS and BigHit love surprise us with more things.

So here is a calendar of March of all  main BTS/BigHit events: 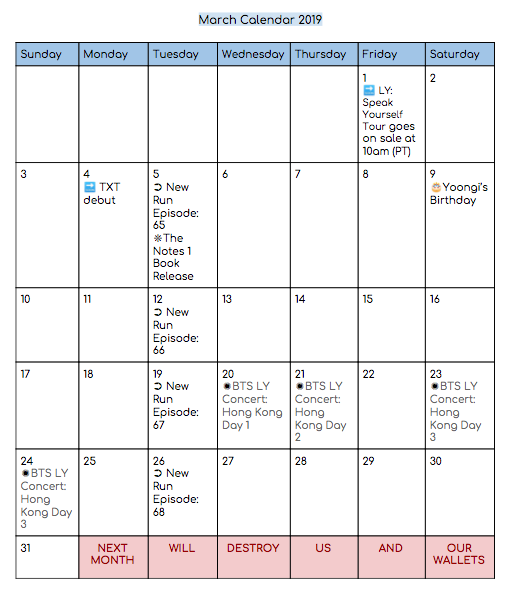 Thank you so much for reading! Comment down below if these site had helped you catch up with any of the BTS news at all.