The entertainment business has made a huge impact on our society today. Influencing a variety of people who watch them.

With this influence on mind, the negative impacts on society is that many teenagers now choose to watch movies rather than spend the time reading a book.

Decreasing the percentage of the amount of people who actually enjoy and report reading.

In fact, now our majority of populations lacks the joy of reading. Instead they choose to go on their phones for hours on these specific online platforms (e.g. YouTube, Instagram, Snapchat, etc.)

Besides, the percentage of teenagers who report reading is still less than 20%. In this new year of 2019, more and more people go on their devices onto social media.

Although, our generation has greatly evolved into a future with technology, many people don’t realize the negative risks it causes the young mind.

Balance is key when it comes to heading onto these online platforms.

It’s possible that the entertainment business realizes that and wants to lead future viewers to the right direction of gathering knowledge from reading. By using that note “Based on the novel…”

I feel this is a theme to get society back into reading as they have missed out on a fantastic story just by watching it instead of experiencing it, by reading it.

Books are much more than just plain, old, stories, they have evolved to equip you with the perfect standards for life.

In fact, just watching the story play out in front of you is never the same feeling as reading it and putting yourself into the story’s world.

Or maybe the entertainment is running out of ideas that they just copy ideas from novels (since most people don’t read anymore anyway).

Now what do you think of this theory? Comment down below your thoughts.

SPOILERS AHEAD, so if you haven’t watched the movie don’t continue reading unless you want to be spoiled. The Netflix original film “Bird Box” debuted December 13, 2018 which lead actress Sandra Bullock. This Horror film based on the book Bird Box by Josh Malerman brings the story to life for worldwide audiences to see.

Various metaphors have been found throughout the film and each represent a huge part of the journey that Malorie undergoes.

In the beginning, Malorie felt lonely as shown from her paintings all in black and separated from the rest.

However through the journey Malorie bonds with her new children and would even sacrifice herself for them.

The Blindfold has been a powerful symbol since the 15th century  meaning “the golden light of truth shines through the darkness”. Not being able to see the evil or walking blind is a symbol of hope and faith.

Birds symbolize freedom and hope which is shown throughout the film as Malorie constantly uses the birds as a guide away from the “monsters” that someday they would make it home.

The birds in the box were the colors of blue and green which symbolize healing.

Also there were exactly three birds in that box which represents completeness and Malorie with her two kids.

The river symbolizes a journey towards enlightenment. Which is kinda of what Malorie undergoes as she finds a safe haven from all the chaos of our current world.

When reaching the sharp edges of the river, she warns Boy and Girl that one of them must look, which is technically sacrificing them as they are “looking” at the possible “monster”.

This event symbolizes the Trolley Problem, a thought experiment in which a runaway trolley is about to run away five people, however, you are next to a switch that would switch the train tracks onto another path.

But, on that second track is a single worker. Should you flip the switch?

The percentage of people flipping the switch is about 90% as they believe the right move is to kill the path with less people.

As they believe that is ethically right, but then that puts you in the position of murder as you actually made the decision to kill someone, not the trolley killing them. 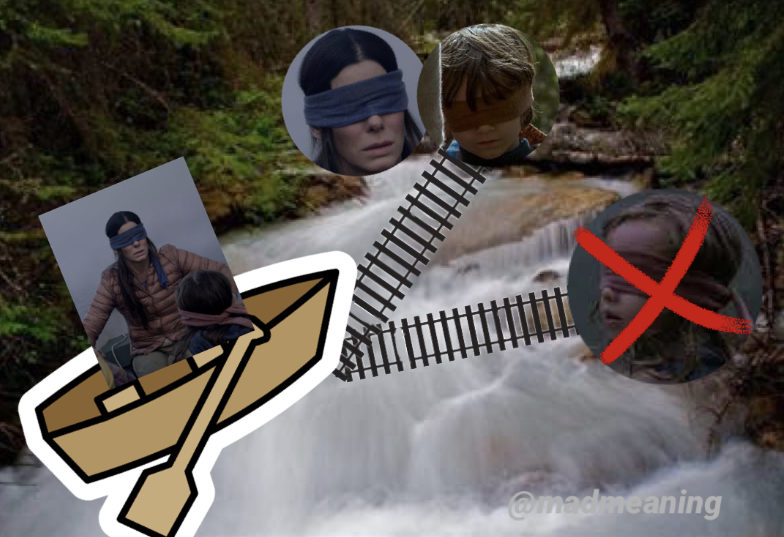 Similar to Malorie’s situation she actually considered killing off Girl to save herself and her biological son, as she stated that, “she would choose” when the time came. But in the end, she concludes that she wouldn’t sacrifice anyone and decides to save both of them.

The name “Malorie” or “Mallory” itself already means the unfortunate one or the unlucky one, originating from the French surname.

“…An entity that takes on a form if your worst fears or your deepest sadness or your greatest loss. Aka Manah,… Varios Daevas,… Surgot,… Huli Jing,… Puca… All different names, but the same thing… The end of us”

In Avestan culture, “daevas” are gods to be rejected.

In Chinese mythology, The Huli Jing are creatures who could be good or bad spirits. Jiuweihu (九尾狐) translates to nine tailed fox first written during the Han Dynasty.

The Irish “Puca” translated to spirit or ghost is found in Celtic folklore who bring both good or bad fortune.

Although most of these creatures may look or even seem extremely different from each other, many of these familiar faces resemble some of Gary’s pictures.

During Malorie and Olympia pregnancy, they finally go into labor as Gary stays in the living room. Suspiciously, he takes out a sketchbook from his bag. In the bag, numerous drawings of the “monsters” were shown.

He takes all the drawings out, placing them all the table carefully. Afterwards, he continues to take the sketchbook as he starts to sketch out a new “monster” drawing.

Theories of the Chaos

Many symptoms of this illness generally consists of fear, anxiety, fainting, dizziness, and anything else that would affect the area of the brain. Neurological affecting the hippocampus which affects many areas such as decision making and emotions.

The first ever recorded example dating back to 1900 BC in Ancient Egypt. Where women were diagnosed later in 5th century in Greece called the Wandering Womb.

– Dancing Plague of 1518 in what is now current France.

In Bird Box, the movie states that this illness started in Russia which later spread to Alaska which is close to California where the story mainly takes place in.

“Chemical weapons are devices that use chemicals to inflict death or injury; biological weapons use pathogens or organisms that cause disease. Pathogens include bacteria, viruses, fungi, and toxins (poisons produced by animals or plants).”

Similar to The Mist, novel by Stephen King, the military accidentally opened a portal to another world, where those creatures entered Earth and those who enter through the mist see their worst fear.

In Bird Box, those who see the “light” or the “monsters” try to commit suicide or become some sort of demon helpers of the monster.

For instance, while people like Jessica, Olympia, and Tom killed themselves, other maniacs such as Gary are actually followers who make others kill themselves.

Since we never actually see the “monsters” it might explain the people’s extreme actions as the air they’re breathing has toxins caused by the Chemical Biowarfare that makes them hallucinate.

In fact, it’s possible some actually saw their death, causes by the “light” which may be a representation of the fear of God. For example, Judgement Day, represents the end of the world. Which explains the bright light but not why they kill themselves.

What did Jessica see in the Bird Box?

There is no exact evidence of what Jessica saw, but with the theories listed above, it’s possible she saw her greatest fear, like losing Malorie as we see their close bond with each other.

Now we could make hundreds of speculations but we’ll never know what she actually saw unless the Directors decide to spill the tea.

Thank you so much for reading! Comment down below if these theories helped with your curiousity of the film.