On Thursday, February 27, 2020, BTS released their official music video for their title track “ON”. I gotta say, at first the music video definitely seems more like a movie rather than a music video.  However, with a closer look and constant streaming, you can actually find many hidden clues and messages in each scene being portrayed.

Watching the music video for the first time can be really confusing. Especially if you’re not familiar with or keeping up with all the previous theories. If you want a better in-depth explanation on all previous music videos and how they each connect to each other, I’d suggest you take a look at this first:

First off, the music video starts in what appears to be a battlefield. With Jin standing at the center and soon the scene transitions to Jungkook running away from “something”.

Already from the first couple of scenes, we know that something is off and that they appear to be some dystopian worlds.

With the old-fashioned/apostolic clothing and dead people all around. Possibly from a war, I assume. As the video continues, the tone dramatically changes from curiosity/chase scene to a more dark and cult-like mood.

We also see a ginormous wall, which begins to open, revealing a large cliff. All the members along with their followers, enter the wall.

But it is the members who climb up this cliff, with Jungkook running off toward the edge. Soon the MV ends with a cheerful and peaceful resolution to close off the scene. Leaving fans with a text that says:

“No More Dream” transitioning to just “Dream” because that dream had now been achieved. 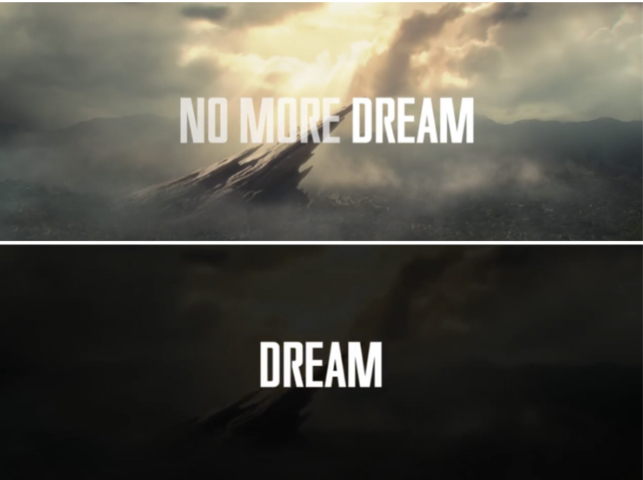 Throughout the music video, many fans can find familiar symbols or references to a wide variety of shows. From the pride rock from Lion King to Noah’s Ark. 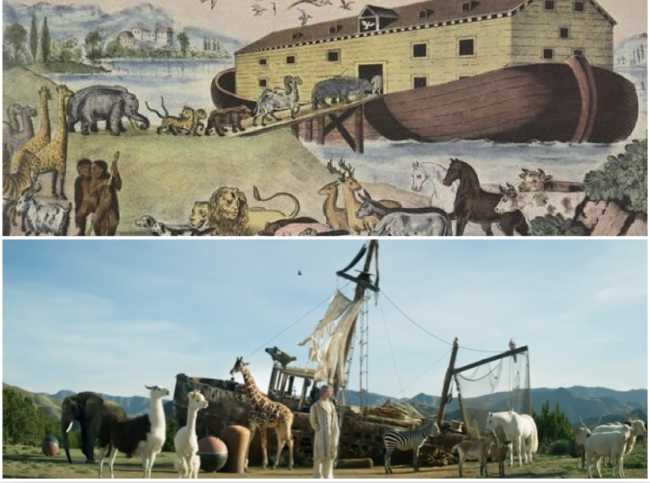 BTS has made various biblical references in the past, such as their Blood Sweat and Tears music video. Featuring paintings and angels of all sorts.

But in this particular video, Namjoon is shot next to a boat, with two pairs of animals boarding the ship. Just like in the Bible. Jin also appears to have a birdcage with a dove, where he releases it, after the reveal behind the gate.

The cliff that sits behind the wall, might be a symbol of peace and freedom, as does the dove being released. The reference to the ark could also represent the sudden change the world was going to go through.

Transitioning to a darker subtone of the cults and “negative” aspects of the world that was going to be erased. Which is the sole purpose of the ark in the Bible, washing away all the present evil. 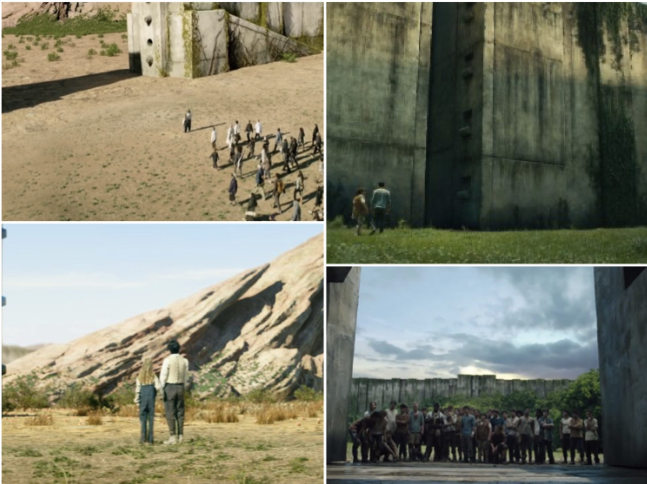 Looking at the scenes from the On music video, it’s quite possible that BTS had actual shot the MV at the same location as Maze Runner.

Including the wall, which is quite identical to the wall from the Maze Runner film series. 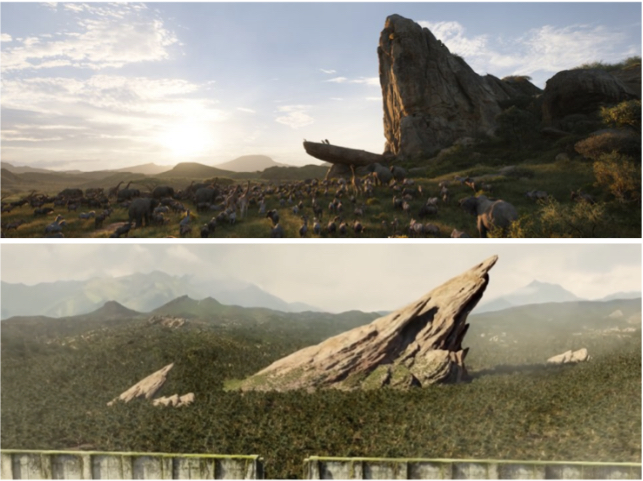 Besides the memes, the cliff reveal behind the wall actually looks very similar to the pride rock from Lion King. Which could represent hope, freedom, and liberty. Resolving any inner conflict they used to have.

Lord of the Flies 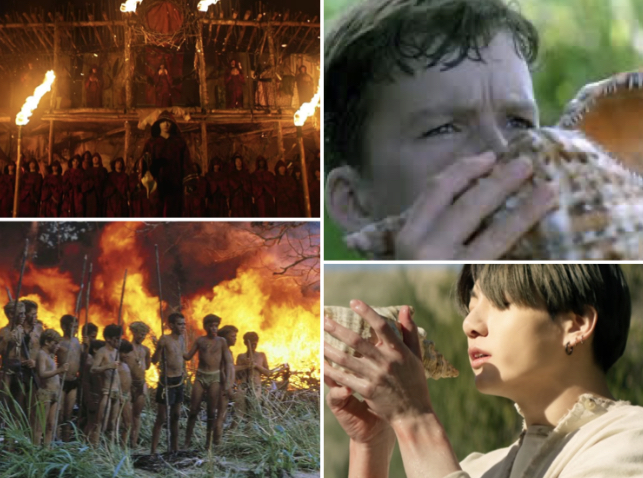 If you’re not very familiar with Lord of the Flies, it’s a dystopian novel that follows a story of a group of young boys trying to survive on a stranded island.

Discovering themes of conflict between human nature (savagery) and civilization (and it’s rules and order).

One of the characters even uses a conch to call order among the other boys, but as the story progresses, chaos rises and the boys are never the same.

Similar to the On music video, as soon as Jungkook blows on the conch, darkness fills the sky and the video transitions to a dark, cult-like setting. 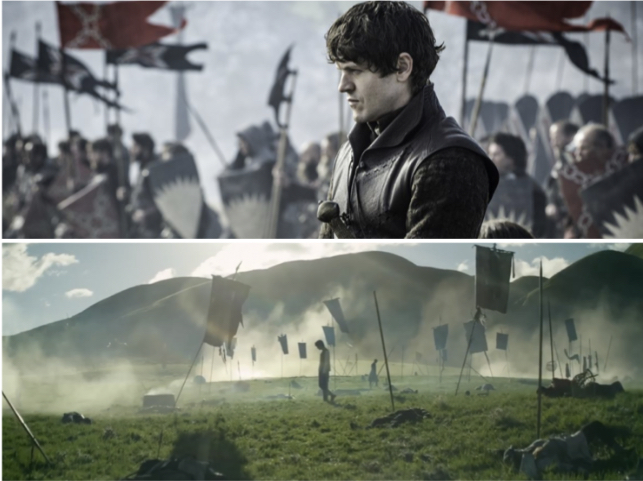 Many fans who are also fans of GOT, mentioned the similarity of the beginning scene of the MV to the Battle of the Bastards.

In this fight, Rob Stark and Jon Snow (the bastard) engages in battle with Ramsay who ultimately wins because they received help from another clan.

However by the looks of the music video, we see a bunch of the dead bodies on the floor, but don’t know what actually happened. 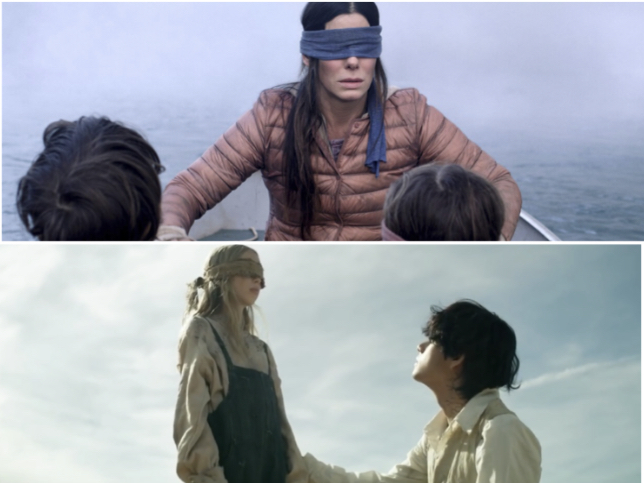 Like Birdbox, in BTS “On” MV, it portrayed birds as some sort of symbol for peace or freedom. Taehyung is seen with a young girl who has a blindfold.

The blindfold itself can be a symbol of trust and once Taehyung takes it off, he holds the girl’s hand and together they walk through the wall.

The story of Prometheus begins with his benevolence towards the human race, risking his life to give humankind gift of fire.

However, seen as a traitor by other gods, Prometheus is punished for all of eternity by having his liver being pecked alive by birds, just reincarnated just to suffer all over again.

If you watch the music video, you see Jungkook running away from something, which may represent him being a traitor, with thorns hand-cuffing his hands.

Next to Hoseok, you can find a body on the floor. Which is actually Jungkook, if you look closely, as he is being pecked (alive) by a bird. As the darkness rises, Jungkook is also seen holding conch (power), the gift to the humans.

“The Ones Who Walk Away from Omelas” 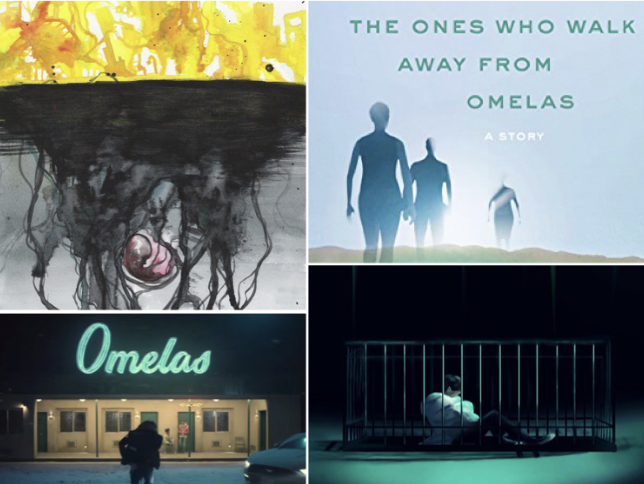 The “Omelas” symbol first appeared in their Spring Day music video. Based on, “The Ones Who Walk Away from Omelas” a philosophical fiction narrative by Ursula K. Le Guin.

Depicting a story of a utopian city of Omelas, which is powered by a child’s misery. Fighting a theme of individualism vs society and what society would sacrifice the happiness of one to support the happiness of more.

Many fans have speculated Jungkook being that kid from the Omelas, who is suffering just to provide the other members their happiness…

Their own music Videos

If you look closely at Taehyung and the little girl, they actually resemble the animated characters from the ‘Make it Right’ music video. With a dark-haired male and a blonde girl in blue. 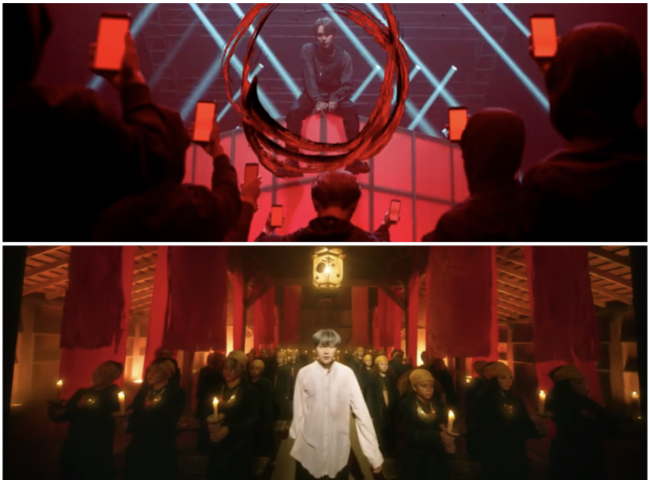 I also believe that the cult scene with Yoongi could resemble the scene in “Interlude: Shadow” music video. With a red aesthetic and an unwanted crows/cult surrounding him.

And of course, the black capes is a direct reference to their Fake Love MV (extended ver.) or representing their darkness/shadows being destroyed. Opening their lives to the brightness and joy in their hearts.

The ‘Black Swan’ Comeback Show 200227 with M-Net Kpop also has many hidden messages as well, so I will also include them in this theory.

Feather, as we know, are part of wings, whether they’re from a bird, an angel, or a demon… Many of BTS past music videos have featured images of wings or feathers such as the HYYH or WINGS era.

From pillow feathers from Jimin’s Lie MV to Jungkook holding a feather in Young Forever MV to the actual Blood Sweat and Tears official MV.

But now, we even have their Map of the Soul:7 concept photos and the single ‘Black Swan’. All of which give fans closure to this never-ending theory.

From the comeback show, Taehyung is the only member wearing a black feather in his outfit. As many fans know, Taehyung is supposed to be Abraxas (from the Blood Sweat and Tears MV). This could further support the idea that Taehyung is the fallen angel or the black swan…

If you haven’t read the official webtoon from BigHit ‘Save Me’ yet, I highly suggest you do, so it will make the interpretations of the BU theory much easier:

But to summarize, Jin is trapped in this time loop where he must travel back in time to save the other six members from dying. In doing so, he recovers many missing pieces of the past. Which leads to a bigger mystery, that all seven of them must solve together. 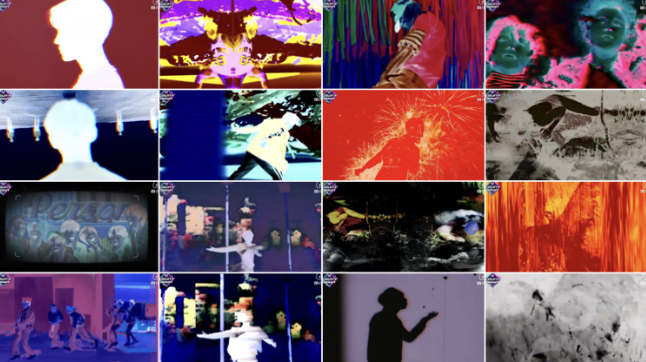 In the intro before the performance starts, fans are faced with a quick recap. Filled with distorted images or possibly memories that have been altered. Many of these inverted colors appeared in past music videos… which could mean BigHit wants us to connect them.

In the same intro recap, various words also appeared on screen. Similar to the Love Yourself comeback shows, BTS and BigHit managed to sneak it some more theories.

“We were only seven”

The lyric “we were only seven” also appears in the song “We Are Bulletproof: the eternal”. These words could represent how this album Map of the Soul:7 is supposed to be about them and their themselves, no one else.

On a more saddening tone, fans have recently found out that ‘Black Swan’ can be easily changed to “swan song”. By definition, a swan song is a person’s final public performance before retiring.

Now I don’t know if this theory is true, but if this is really BTS final album and final performance, just know, we as fans, should always respect their choice and decision to do so.

Thank you so much for reading! Comment down below any of your thoughts on this whole theory.