Gravity Falls, Rick and Morty, and Star vs. the Forces of Evil (…) Are All Connected in the Same Universes 2019 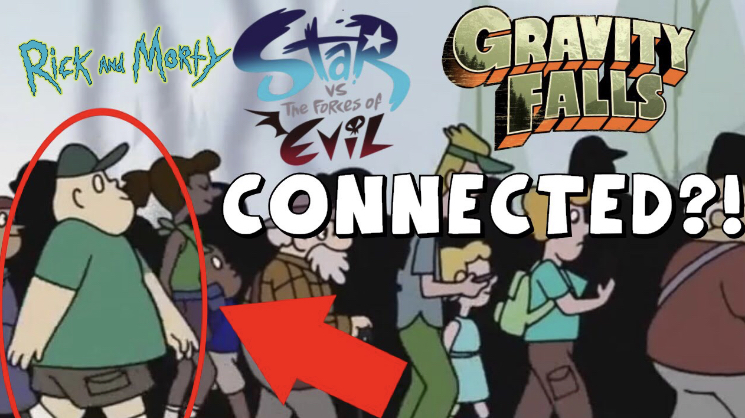 Gravity Falls, Rick and Morty, and Star vs. the Forces of Evil (…) Are All Connected in the Same Universes 2019

By now, you probably must have noticed all the weird little coincidences and easter eggs between these famous TV shows.

Although not all shows are under the same cable, network provider, Gravity Falls and Star vs. the Forces of Evil sure are. However, this won’t be much of a problem once I tell you all of the easter eggs the show provides for us.

First off, before the theory starts, let me provide a little introduction to reboot your memory.

Premiering June 15, 2012, and having its final episode on February 15, 2016. Truly a very sad day for all Gravity Falls fans, however, the story may have ended just yet.

Although some fans may have already speculated some theories about Rick and Morty being the unofficial sequel to Gravity Falls, their connections between universes are real facts.

With Stanford Pines, Rick Sanchez, and Star Butterfly all being the most wanted criminals in the galaxy. In fact, Gravity Falls creator, Alex Hirsch is close friends with Rick and Morty creator Justin Roiland. So this theory is totally plausible.

Premiering its first episode December 2, 2013, and rumored a fourth season by this November 2019. With program creators Justin Roiland and Dan Harmon.

Star vs. the Forces of Evil

So let’s start out with the fact that all these shows contain some sort of a multiverse. Meaning that these characters are able to travel in and out of different universes at ease and maybe even travel to other shows’ universes.

Although the Pines may not agree with the idea of multidimensional hopping, they have been exposed to this kind of technology.

One that Ford Pine has created himself with each of the Journals that he’s kept. In fact, Ford has even tried to test his creation and accidentally dropped in his cup, pen and notepad, the same exact objects that appear in Rick and Morty. 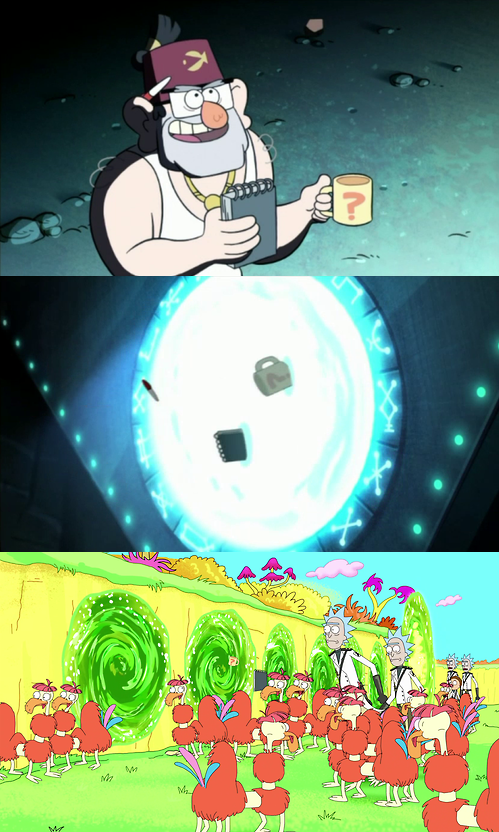 I admit, this theory was quite popular and most fans, veterans or new might have already heard of it, but there’s so much more to uncover.

Bill Cipher is a powerful enemy, that maybe even Rick can’t defeat, which explains why other alien universes in Rick and Morty are currently investigating the iconic triangular shape. 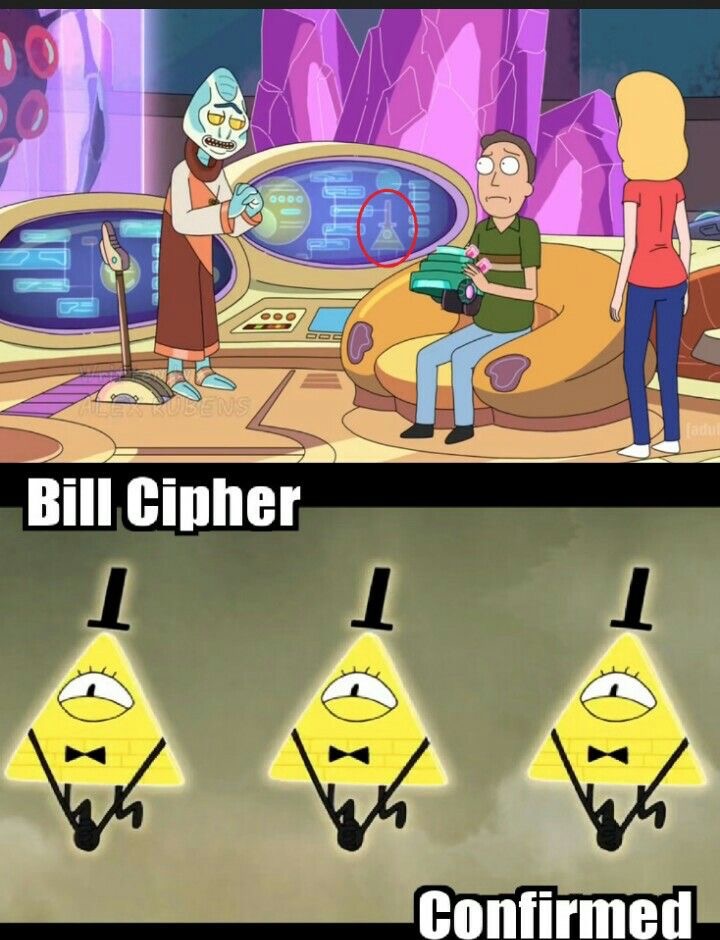 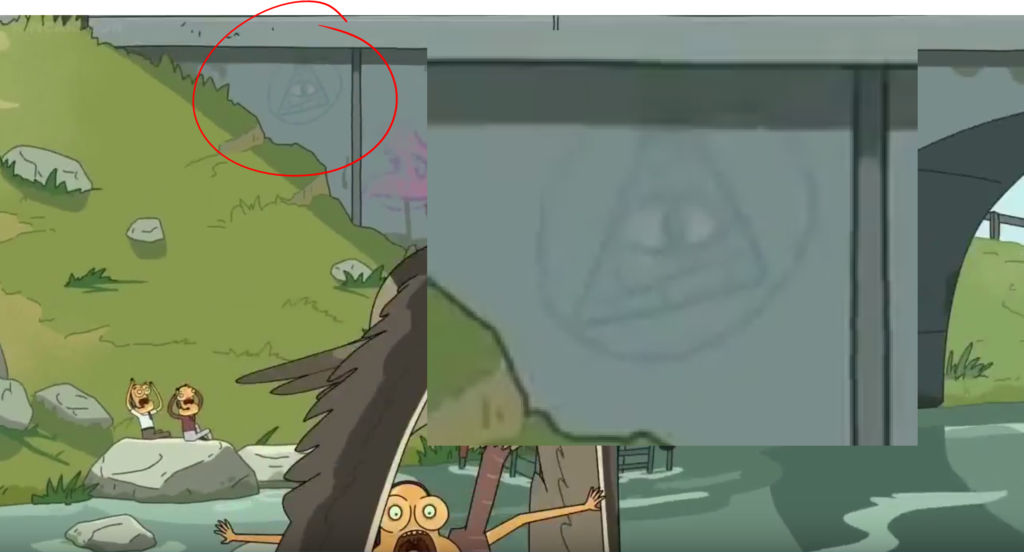 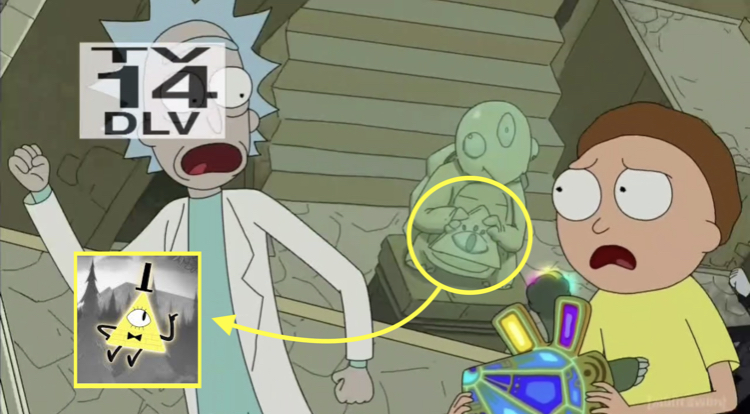 Which may even provide an extra plot hole to the new season 4 in Rick and Morty, having Rick Sanchez find a way to defeat Bill Cipher once and for all. I mean some fans have even speculated that Bill has already possessed another person’s body in the Rick and Morty universe. And that person is….

The journals in Gravity Falls play such a huge role in the show that now even fans can purchase one of their own. It’s incredible and the pages even include the hidden blacklight codes that the show has. However, some fans have detected a very interesting code that may pull the Gravity Falls and Rick and Morty universe even closer than before. 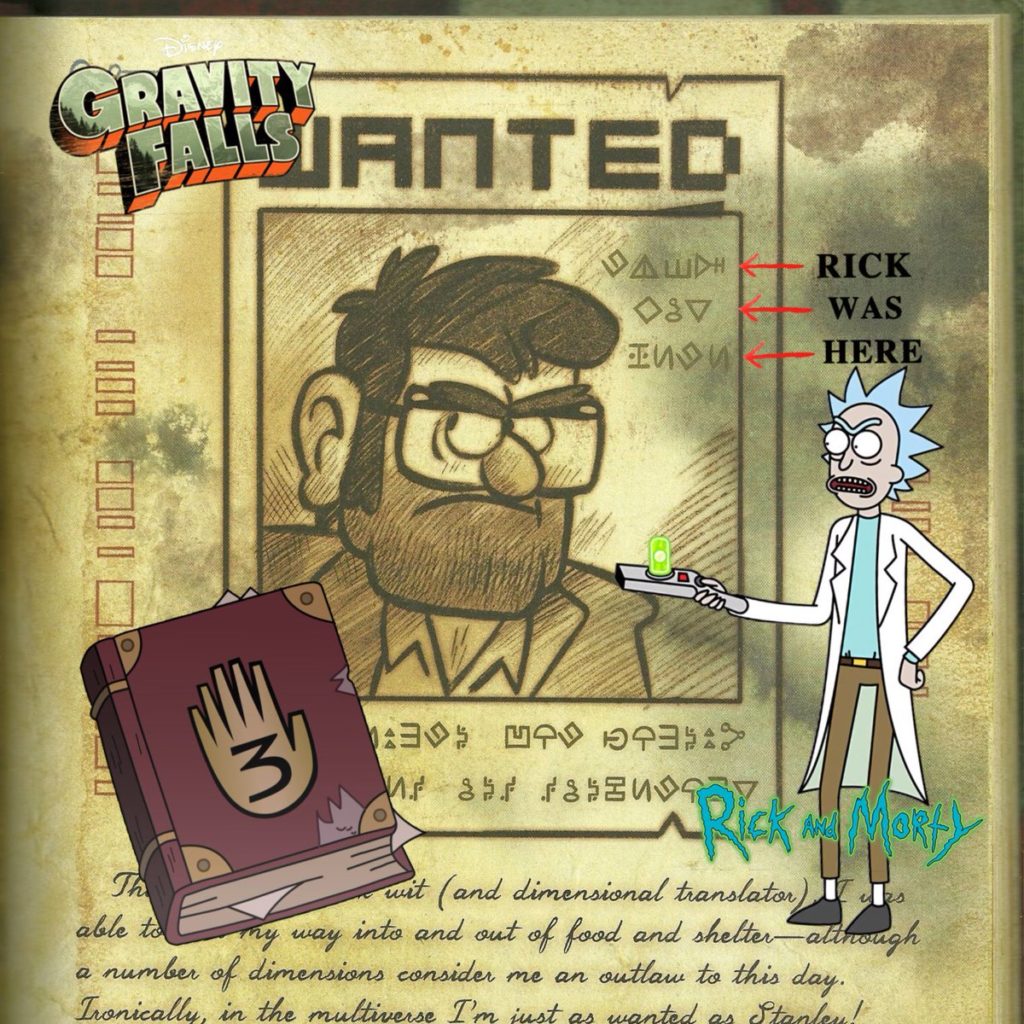 A note that says “Rick was here”… now this book was claimed to be canon, according to Alex Hirsch. So, why would he purposely input a secret code that involved a Rick and Morty easter egg, unless he was trying to prove that these universes are indeed related.

That Ford Pine must have been apart of Rick’s criminal crew when he had been stuck in an alter dimension that was never fully explained in the show itself. 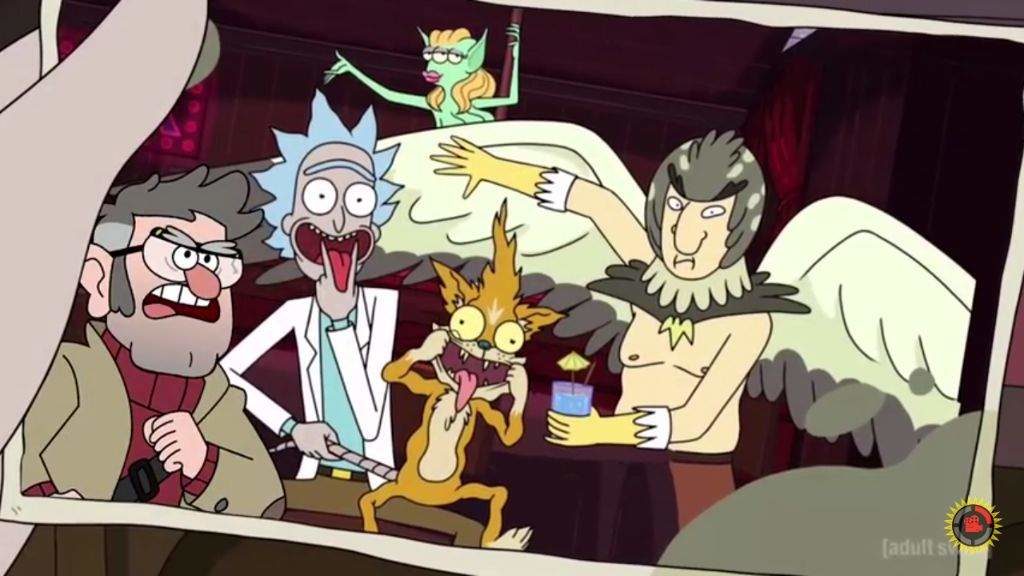 Also, other interesting messages found in the book remain within the monsters and creatures that Stanford had found questionable. 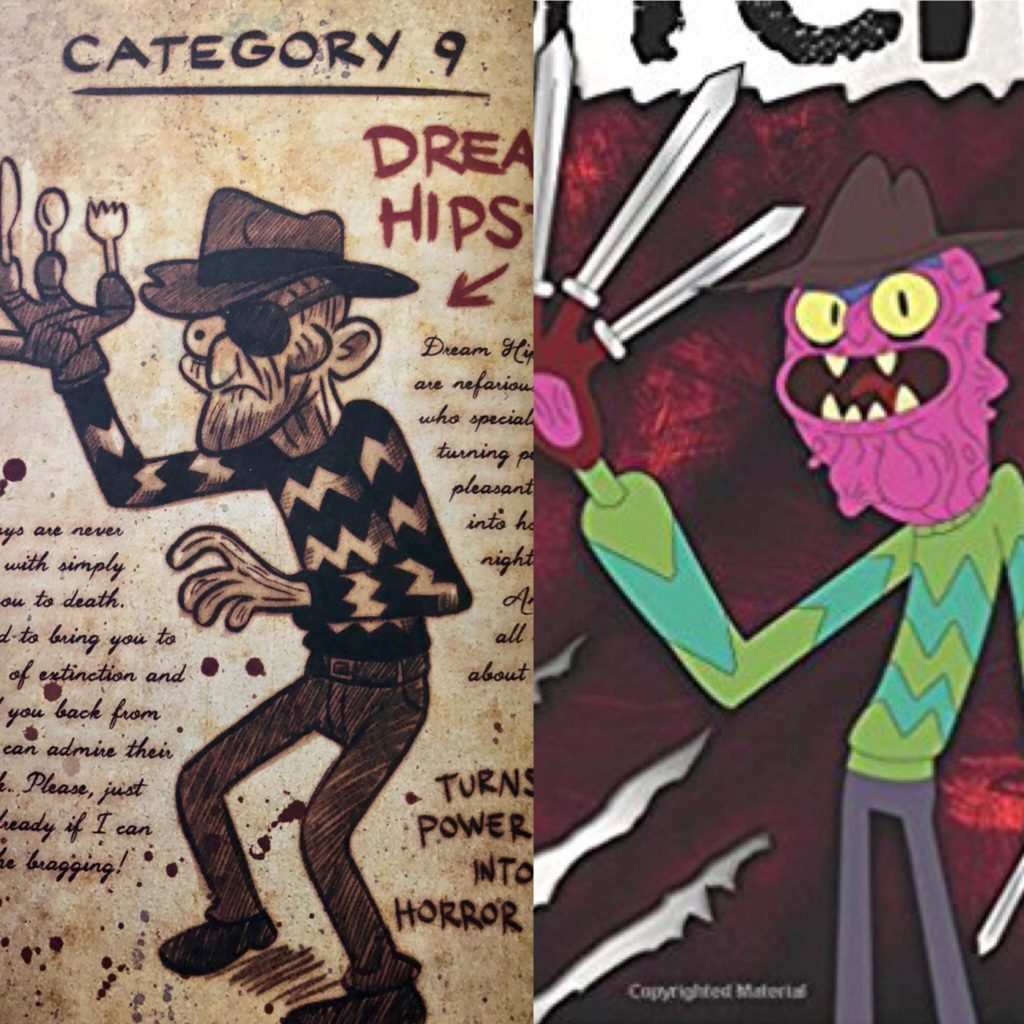 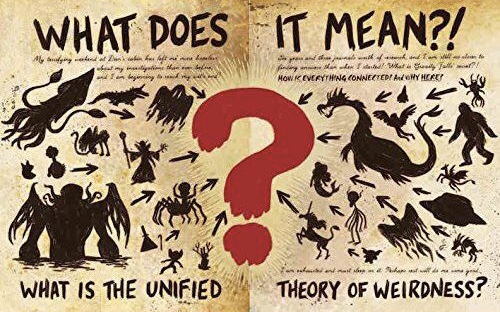 Now, most creatures you may probably recognize from the show itself, but some of these creatures are not from Gravity Falls at all. In fact, I found two distinctly shaped creatures to be very iconic in the Rick and Morty Franchize.

Instead, we’ve talked about what’s within the journal, but now I feel to discuss the physical book’s appearance within these shows. 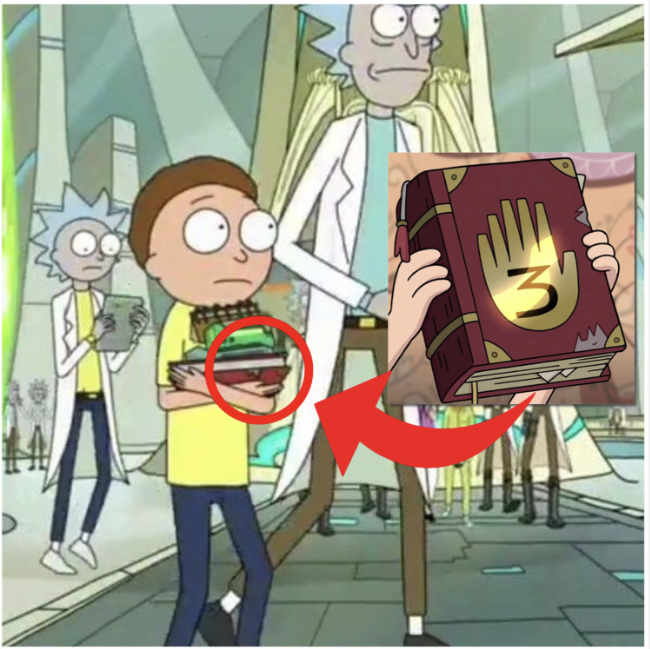 A Morty carrying the third Journal from Gravity Falls. And yet, in that very same episode we see: 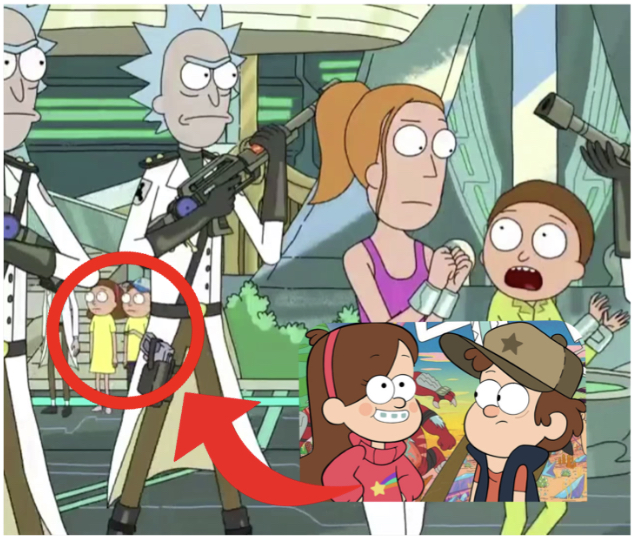 That’s right, two Mortys dressed up Dipper and Mabel from Gravity Falls. And this was featured in the Rick and Morty show itself on Season 3 Episode 7. Now only do we have one easter egg in this episode, but two. Both about Gravity Falls.

Besides, not only is the Cthulhu creature from the Rick and Morty found in Gravity Falls, but the 8 Ball Monkey from the Gravity Falls intro can also be found in one of the episodes of Rick Morty. 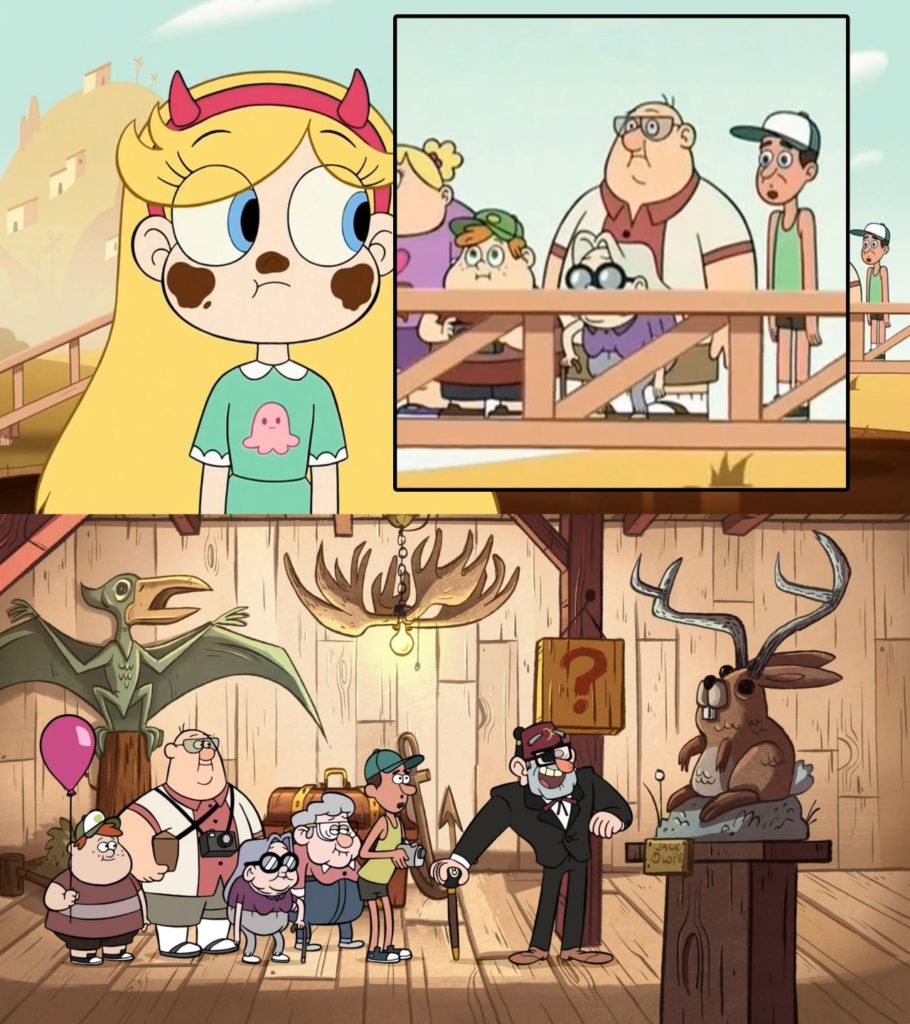 For some reason, most of these connections are just the fact that multiverses can allow the characters to visit each other, but it’s the secret messages found in Ford’s Journals that help to prove this case.

The power couple of Waddles with the goat can be found in Star vs. the Forces of Evil. But not explicitly, you have to look closer. In fact, these creatures are actually the hybrid children of this couple. 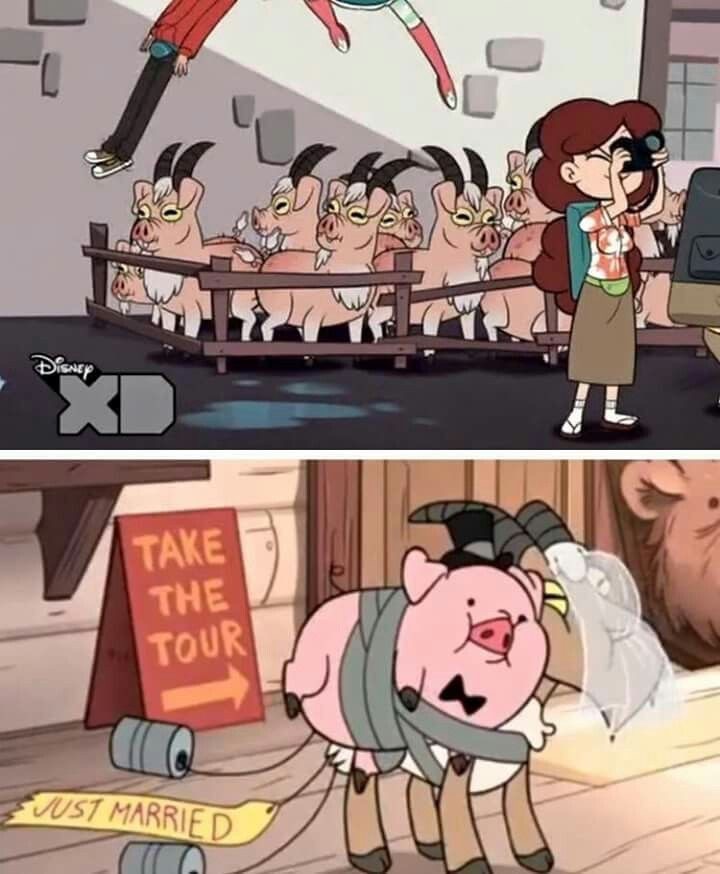 Star vs. the Forces of Evil has so many references to Gravity Falls that maybe you have to watch both shows together to understand most of the references. Like the Sev’ral Timez boy band that Mabel obsesses over can be found as a sticker in Marco’s locker. 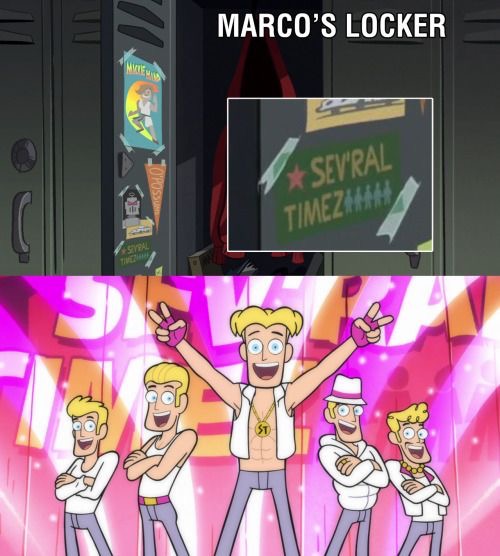 Also, I like to believe that Sev’ral Timez is just a parody version of Nsync or Backstreet Boys, but more Nsync due to the same exact “Bye, bye, bye” dance move.

Finally Number 10! In the finale of Gravity Falls, Mabel is contained in her happy land where two very distinctive figures are found. A blue, bodiless Unicorn and a big giant star. Who may be no other than Star Butterfly herself and Princess Pony Head. 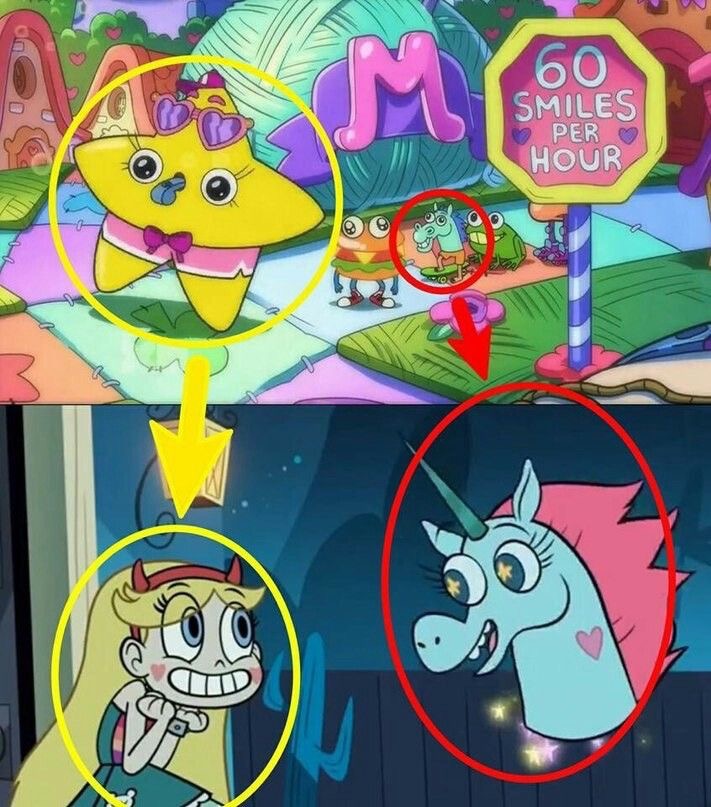 Now, there are probably tons more of references and easter eggs that these shows have but here were the ones I could find. I hope you enjoy, and now here’s a list of similar parallels between all three shows. (below)

Other similar Parallels between the shows 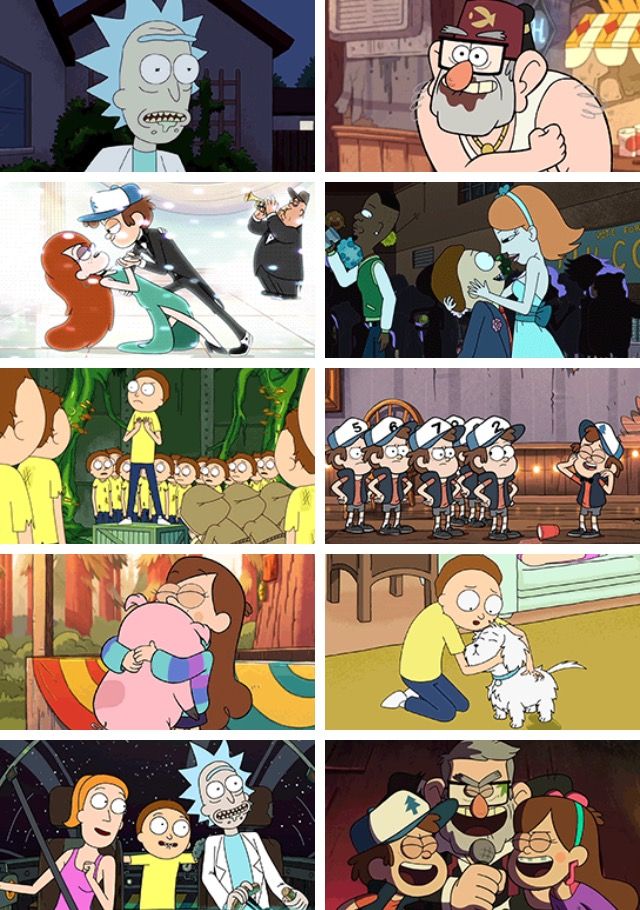 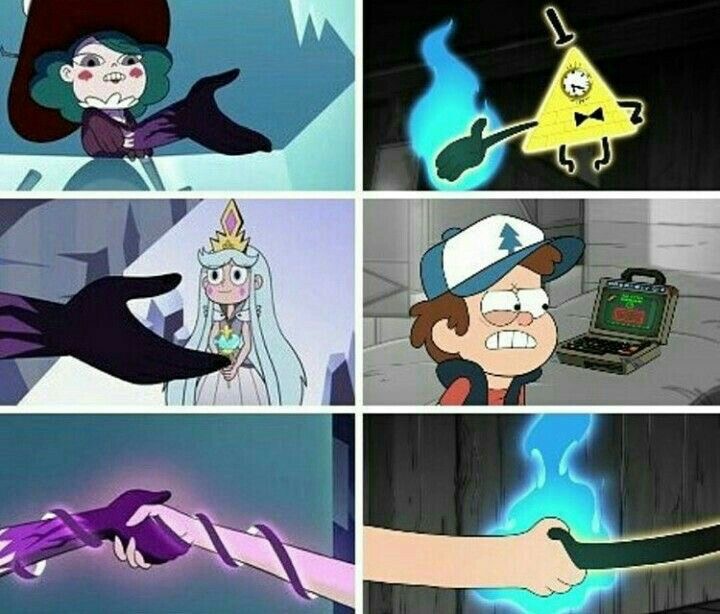 Rick and Morty and The Simpsons are connected

Perhaps maybe the Harry Potter Universe and Gravity Falls are connected as well, more than we even realize. 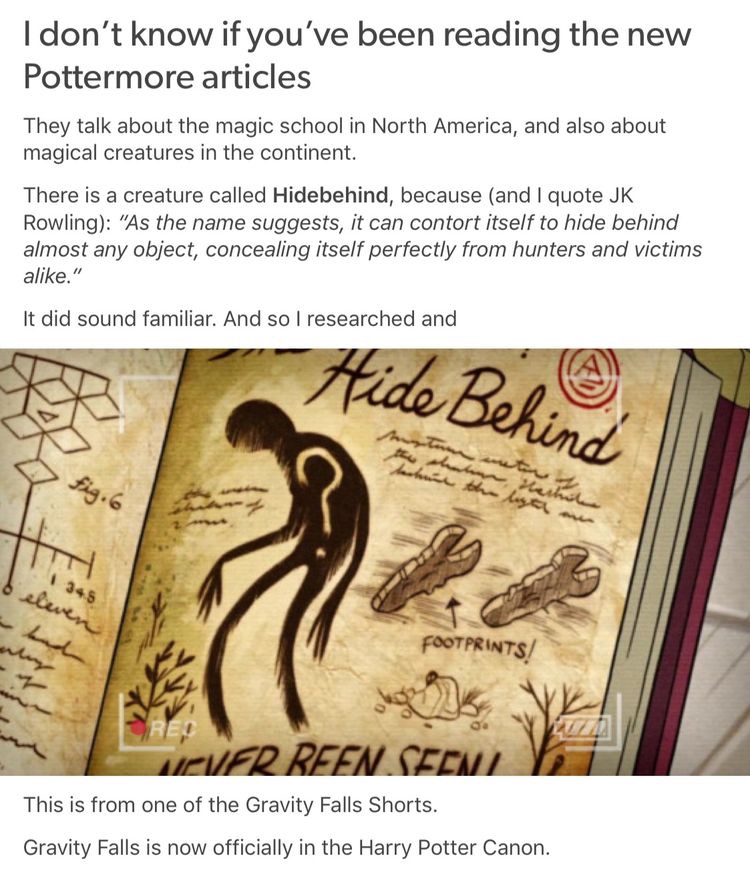 Also, you must have noticed that in Season 2, Episode 9 “The Love God” Mabel finds two distinctly creatures who some HP fans might recognize immediately. The badger and the snake.

In this episode, Mabel quotes, “They’re gonna make a snadger!” just as The Love God helps these two helpless creatures fall in love. 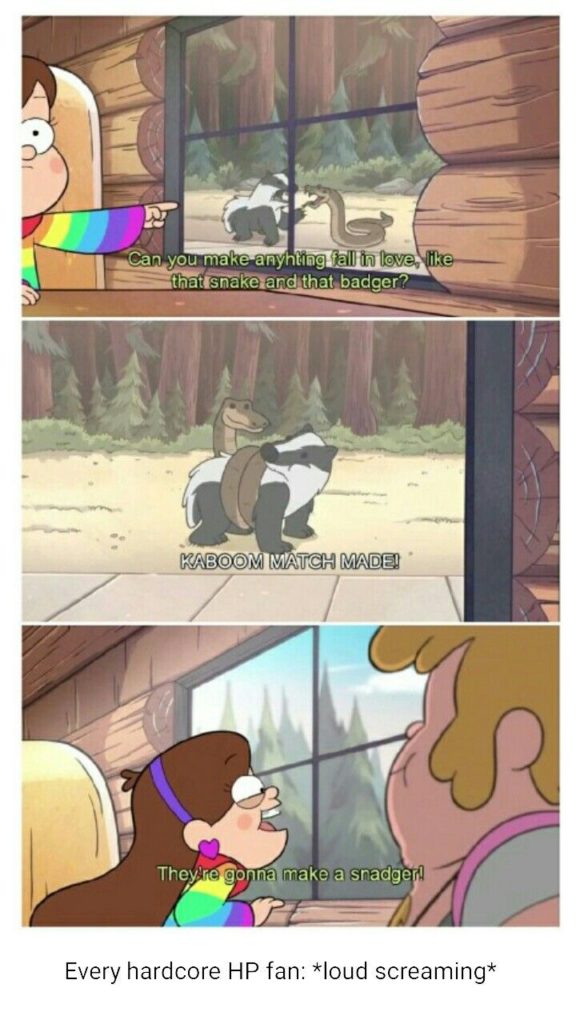 Plus here are some more cute fanart of these connected universes:

*BTW Credit to all artists who have created all these beautiful masterpieces! (If any of you guys know the artists’ username, please comment down below. So I could help give credit to them)* 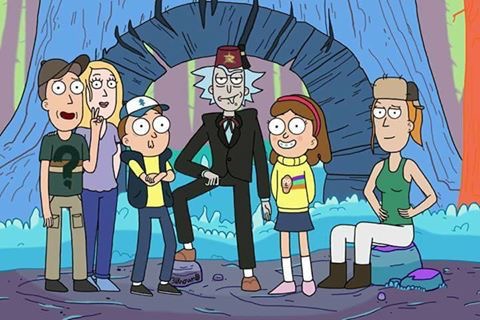 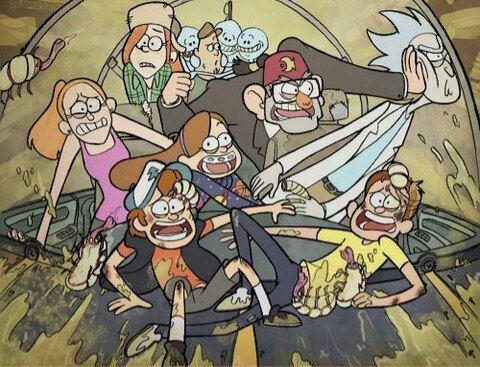 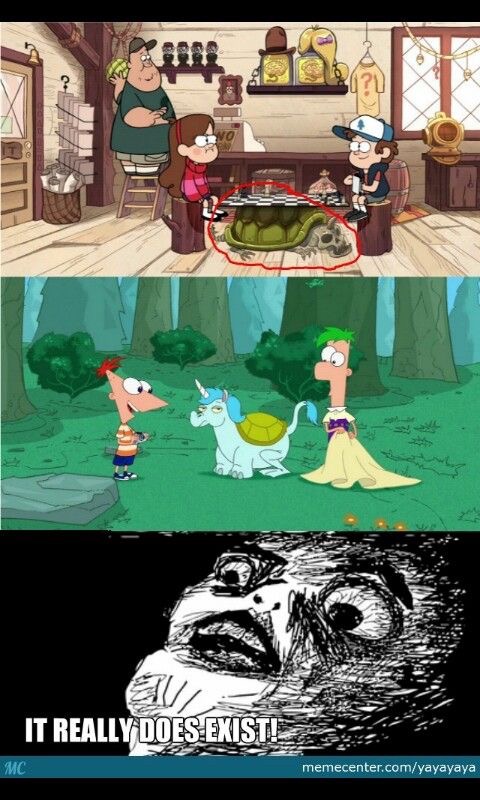 Thank you so much for reading! Comment down below what you thought of these easter eggs or if I may have missed any myself.