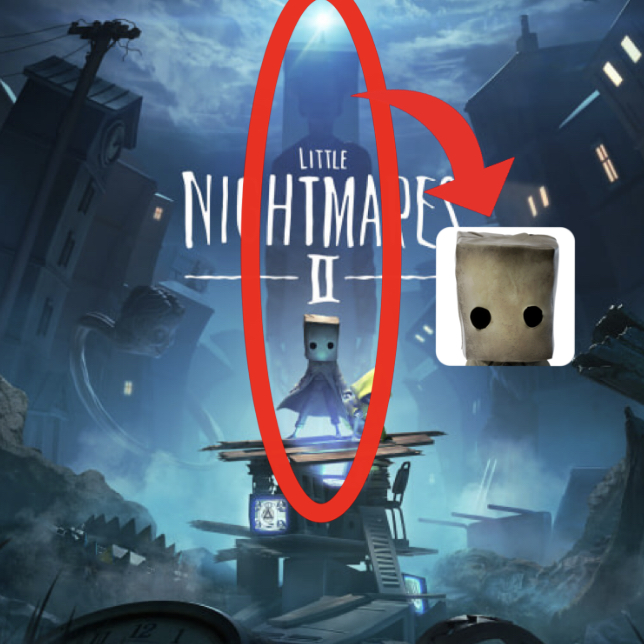 In 2017, Little Nightmares made its first official debut with Tarsier Studios. After receiving such positive reviews, the game became very popular and was even developing a sequel.

On, August 19, 2019, Bandai Namco Entertainment delivers on their promise and releases their new trailer for Little Nightmares 2 as stated. So far upon watching the whole game series, the creators of the game have already stated that this game will be the sequel following Six’s escape from the Maw.

CLICK here to watch the trailer if you haven’t already as I will be spoiling many parts of the game if you had not seen it already:

A Theme on Present Day

Already from the trailer, we can already find many themes that speak of our current society in technology and education. Besides, Tarsier Studios is known for portraying certain strong themes in their games to try and get a message across about society.

For example, Little Nightmares (1) was about hunger and gluttony (extreme or ever excessively consuming). Which was portrayed perfectly with scripted scenes where Six gets hungry, only eating things that get darker or more grotesque as the story continues. From a piece of bread to the actual geisha herself.

We finally get to see what Six actually looks like underneath the yellow raincoat. Which may mean we get a more in-depth background story to her history. As this game has a big message with masks and “true” appearances with almost every character we’ve come across in the first game.

In fact, Six covers her face at the TV screen the same way the “all-seeing eye” looks at her from the first game. So we already know that this “all-seeing eye” being makes it’s return to this game as well.

However, unlike the previous game, players no longer control Six, instead, we play as a new character. One whom we believe is another kid from the Maw and maybe even Six’s new friend or companion.

Who is the Mono? “the other kid”

With game creators stating that players will play as this new character we’ve never met before, it just leads to so many questions.

Otherwise known as the boy with the paper bag mask over his head, named Mono. But if you look closely at his name, it might even resolve some mysterious or add more to the lore.

Mono = one, so maybe he was the first ever kid to escape the Maw or the geisha?

Other theories state that Mono may be the “hanging man” that we see in the first game as we know he makes a reappearance in this game if you watch the end trailer scene on the TV screen very closely. But fans also assume that the bellman may be the hanging man himself. And looking at the poster once again, you see a tall figure, which can only be the hanging man. 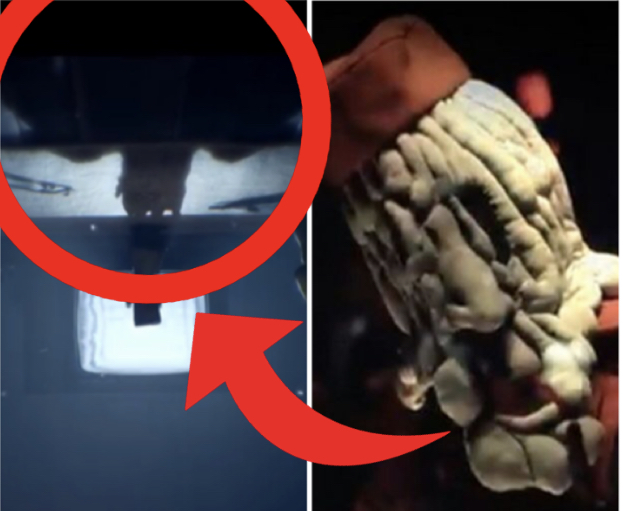 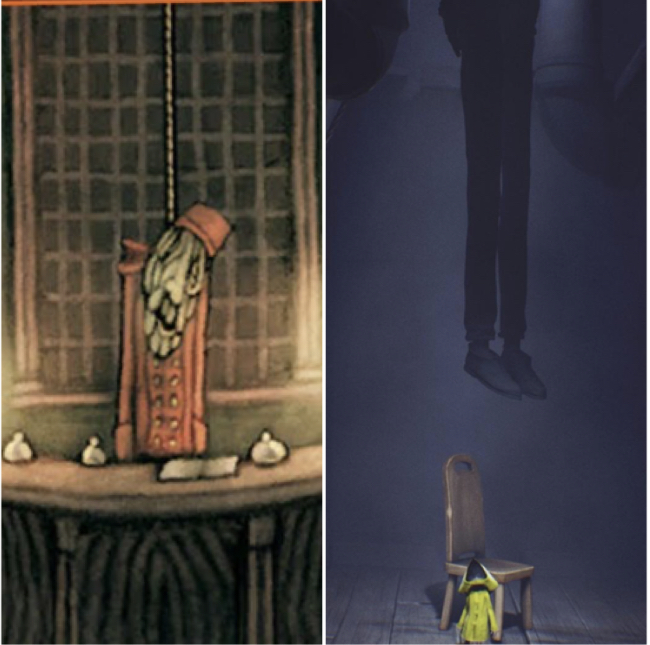 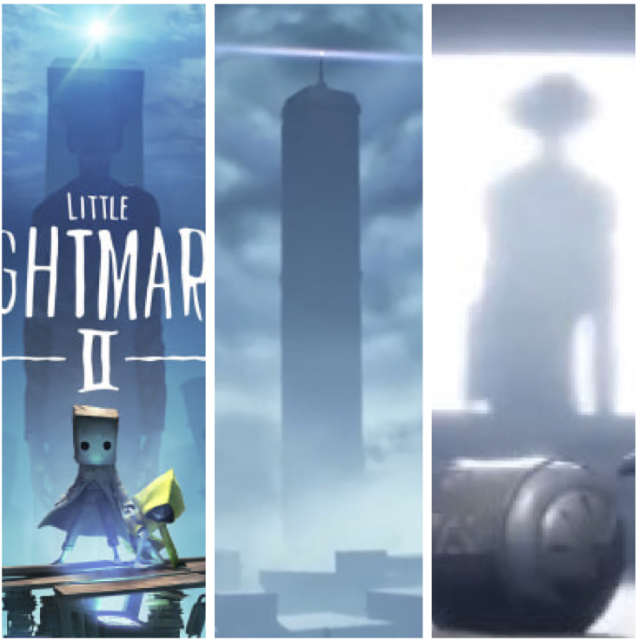 Some fans believe that as Mono grows older he doesn’t want to become like the other adults (we see in the trailer, brainwashed by the screens) so he hangs himself, like the man on the Maw (“the hanging man”).

Mono also seems to be able to teleport (as seen from the trailer). There was a TV on the Maw (post-credit scene of the DLC) and TV at the start of the trailer, so maybe Mono teleported Six out of the Maw which is how they ended up together in the first place.

We as a society are too addicted to screens/technology that we don’t see what’s going on in front of us. The static on the screens and people getting mesmerized by it, distracting ourselves from the outside world around us.

Whether it be brainwash or some way to lure the children into the Maw, it must be some hidden cooperation under the “all-seeing eye”.

The end static scene on the TV screen very much resembles the man who hanged himself in the first game. Maybe he got too obsessed with the media it leads to his downfall.

TV screens in the first game

Adults went crazy from seeing the TV in the beginning of the trailer. In the first game, the janitor had a TV but his eyes are buried or hidden so he couldn’t see the TV and didn’t go insane. The granny, however, went crazy from the TV and probably started killing the children.

So that begs the new question, what exactly is being shown on the TV screens.

Is the black tower is the power source of all the media and TVs…. controlling the society at large? Maybe that’s why Six and Mono’s primary goal is to reach the Black Tower in the first place. To put an end to the “all-seeing eye” cooperation.

Another theme we see relevant to our society is our never-changing education system. With all of our new advancing country, you’d think that schools would be the first to adjust to modern times… but it’s not.

Instead, we improve and change vehicles and cell phones for the better. But the minds of the children are at risk, being stuck in the past, never being able to move forward with the future.

Symbolized with the evil teacher, smacking children with her ruler when a kid doesn’t do the work. Showing how school punishes and forces kids to do unproductive work.

References to the First Game

As a sequel, there must be references made to connect the two games. However, one difference is the fact that there will be no more gnomes from the first game. So we must survive without their help from now on.

Firstly, we already notice that Six has made a “friend” the boy with the paper bag mask named Mono. However, we also have new bosses as well, such as the teacher, huntsman, The North Wind (from the Little Nightmares’ comic series), and possibly a reappearance of the “hanging man”.

We also find that unlike the first game, there are other kids like Six and Mono… but they are made of porcelain. 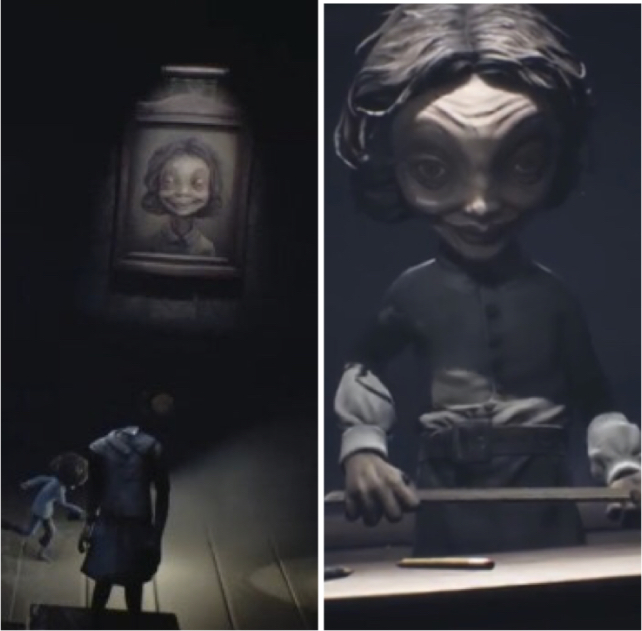 Although the teacher may seem like a brand new character, she’s actually been revealed in the first game. If you look closely upon entering the geisha’s home, you will find a portrait of her face along with the other recognizable characters from the Little Nightmares series.

In the trailer, the huntsman appears to be holding Six captive, where mono will then come for her rescue and that’s where the game then begins.

But in the trailer, he also appears to be chopping up pigs or some disgusting found in the dumpster.

So far, in chronological order, I believe the game will start off on the beachside, where Six gets washed out from the Maw and discovers the world outside. Next, maybe the huntsman will find Six (and since the creators of the game state that players will play as “Mono”) Mono will have to enter the Hunter’s shack and rescue her.

Then, Mono and Six will escape through the forest and finally enter the city. At this point, the game could go anywhere, from the school to the hospital/asylum, but ultimately having the end goal to reach the Black Tower for some mysterious reason.

Perhaps to shut down the whole business of the “all-seeing eye” and the portrayal of the TV screens throughout the city.

Hopefully, we’ll even get a better insight on the Maw’s sole origin and purpose from the first game. Maybe even displaying a better understanding of the Little Nightmares Universe as a whole.

Thank you so much for reading! Comment down below your thoughts or any theories you have on the upcoming sequel.