‘The Platform’ (El Hoyo) All Meanings and Hidden Clues Explained 2020 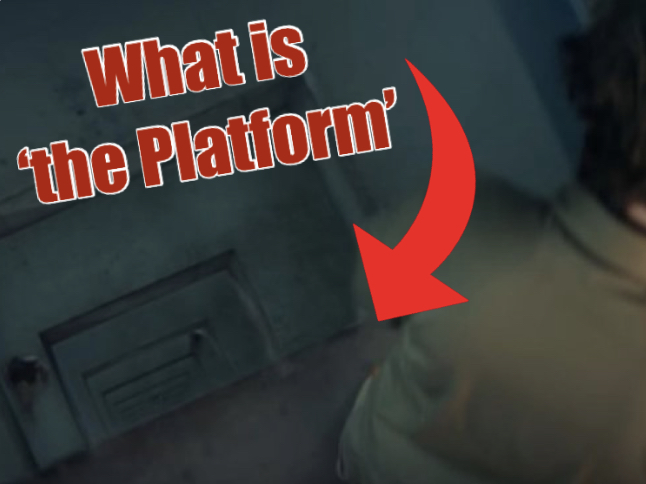 ‘The Platform’ (El Hoyo) All Meanings and Hidden Clues Explained 2020

Recently, Netflix added a new horror/sci-fi film to their collection of films to watch over this alarming pandemic. This new dystopian thriller by Galder Gaztelu-Urrutia, a Spanish director, has revealed a truth about our current society.

With the rapid spread of the coronavirus frightening many, it is evident that this film portrays an accurate representation of today’s nation. With the toilet paper shortage and people stocking up on piles of resources just proves this greed and ego our society has.

If you like movies like Parasite, South Korean thriller by Bong Joon-ho, then you’ll most likely enjoy this film as well! Both sharing similarities with the same premise of how society is corrupt among those lower on social status.

Following the story of Goreng, our main protagonist of the film, who voluntarily went into ‘the hole’. Having the audience discovering how everything operates through his own confusion and curiosity throughout the story.

What is the Hole (Hoyo)?

Many people have speculated that the “Hole” or platforms, symbolizes different social classes, each receiving different quantities of food, depending on the people on the level above them. Yet no one knows why this began or why it was made in the first place.

As Trimagasi states it perfectly, also being the very first thing ever said in the whole entire movie: “There are three different types of people: those at the top, those at the bottom, and those who fall…”

Each symbolizing a different status and will to make a change in society. Those at the top: people who are happy with where they are right now and won’t change. Those at the bottom: people who want change but don’t do anything about it. Those who fall: either the people who physically fall through levels and die or those like Goreng and Baharat who literally go down the levels, and make a change.

Characters (and their item)

Each person can bring ONE item with them when entering the hole and it can be anything. Yet our main protagonist brought a book with him, a Don Quixote book, to be exact.

Meanwhile, most people, like Trimagasi brought weaponry with them, such as his Samurai-Plus.

Imoguiri brought her dog, as a sentiment companion.

Baharat brought a rope in hopes to escape, but has a flaw, needing the people above him to cooperate with him.

Miharu, a crazy, Japanese woman, who searches for her lost child (son).

Many fans even mentioned that Goreng and Don Quixote look alike. Both revealing truths about society and the corruptness of it. Along with discovering the intentions and character of men. Discussing topics on social class and self-worth in society.

Many viewers have even made the resemblance between Goreng and Don Quixote, himself. 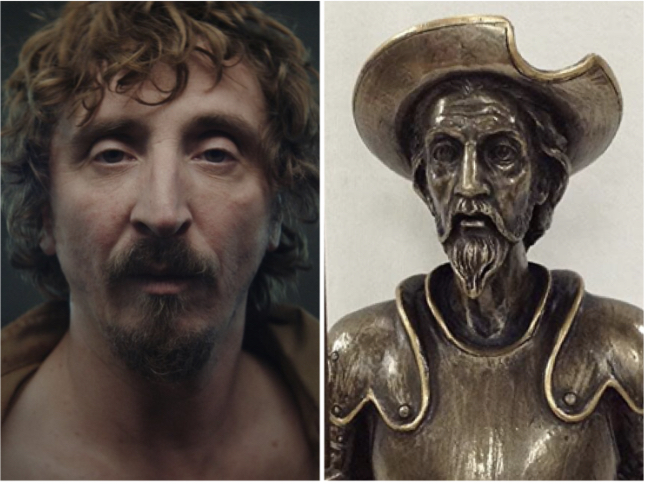 According to the “administration” or Imoguiri, no one under the age of 16 can enter the hole, and there are only 200 levels. As well as saying that Miharu is a crazy, superficial woman who is searching for a child that never existed.

I also believe that the way the story plays out, that each section is separated into different acts. Where Goreng’s character or mental state changes. With each month that passes and having a new cellmate, his perspective also changes, on what ‘the hole’ truly is.

LEVEL 48, Goreng first enters the hole, waking up to find his cellmate Trimagasi, who was placed in the hole for accidentally murdering someone when he threw his TV out the window.

While Goreng voluntarily went into the hole, for after six months the ‘administration’ would exchange his time, for a college diploma.

We, as viewers, can now see that each person going in ‘the hole’ was offered something. Whether it was a submission to death, a college diploma, or a cure to cancer. This beginning stage of Goreng is still very naive and uncertain of how everything operates in this new environment.

Being able to think rationally, claiming how every level should learn to ration foods for those below them. Because if the roles were reversed they would wish the people above them could do the same.

LEVEL 171, Goreng awakens to being tied up by Trimgasi who’s already experienced being in the hole for almost a year now. Knowing that there will be no food, and within 7 days, he will begin to catabolize on Goreng and feed on him. Even offering Goreng some of his own flesh to survive.

However, Goreng saw that Trimgasi’s idea was wrong and rebelled against him, but he was still able to cut a piece of his skin and consume it. Afterward, Miharu returned to save Goreng since he showed her kindness, returning the favor by killing Trimgasi and feeding his flesh to Goreng to help him survive.

This is a breaking point in the film because everything Goreng swore not to do or thought was ‘wrong’, he was now doing himself. He had now cannibalized Trimgasi and saw the error of his ways.

LEVEL 33, Goreng is now partnered with cellmate Imoguiri, the former worker of the ‘administration’ who was curious about what ‘the hole’ actually was. She was even the one to interview Goreng prior to entering the hole, himself.

Asking him what was his favorite meal was (as the administration would put that specific dish with the rest of the other meals on the platform that they distribute to the people in the hole.)

Upon meeting Imoguiri, she also shares similar beliefs with Goreng, as she believes that the food should be rationed equally as well. However, she lacks the strength and aggressiveness to tell those below to do the same.

Not until Goreng finally appeases to Imoguiri and threatens those below them that he would literally “shit” on their food if they didn’t follow through.

LEVEL 202, Goreng now awakes on a brand new floor. Only to find had Imoguiri hung herself, knowing that being this low in the hole is already a death sentence…

Or another reason is that the administration had already told Imoguiri that there are only 200 floors, yet here they were on Level 202. So she might also have killed herself because she realized everything the administration said was a lie.

Goreng’s hunger and craving could no longer wait, so he also begins to cannibalize on her body until the end of the month.

LEVEL 6, Goreng meets a new cellmate, Baharat. Both seeking peace and equal rations of food for everyone. Soon they descend the platform of food, down the levels, in order to provide food for the people on lower levels who were never able to eat.

Meeting a wise man, who told them to use the ‘Panna Cotta’ as a message to send back to those above on Level 0. Having to protect this one dish throughout every floor, even when there were no other dishes to distribute to those on the lower floors.

Supposedly, the hole only had 200-250 floors, according to Goreng’s calculation during his time on floor 202. However, upon finishing the movie, we now know that there are actually 333 floors. With two people on each floor, making it 333*2 = 666.

But because Goreng miscalculated, they soon figure out that if there isn’t anyone left alive on the level, the platform doesn’t stop and will keep descending until someone is alive.

As Goreng and Baharat continue descending, each floor gets more gruesome and disheartening. Until finally, they reach the final floor… level 333.

Only to find a young girl hidden under the bed, in fear of the men. The film cleverly hesitates between the girl and the Panna cotta (the message they were supposed to protect) and the girl who was obviously very hungry.

Ultimately, Goreng and Baharat make the decision to allow the girl to eat the Panna Cotta, as she was actually the perfect message to send back to Level 0… alone.

So Goreng sacrifices his life and the movie fades out as the girl ascends on the platform.

Previously, Imogiurir tells Goreng, that no one under 16 was allowed to enter the hole… However, that doesn’t mean she entered illegally. Instead, I believe that she was born in the hole. This obviously isn’t impossible, because there are two people per hole, and it’s very possible for them to waste time during the month, by having sexual intercourse…

The reason she’s the perfect message to send back to the administration is that she had been on the very last level 333, and yet she had survived throughout all this time without food.

The food represents their most important resources for a human to physically survive: food and water, and one cellmate for social interaction.

The platform could also represent capitalism, as the harder, you work, the more you’ll be rewarded… if you are on a higher level, of course.

However, similarly to reality, people can’t choose which social class to be in, we are born into whatever class in the beginning. But if we choose to change that, then you’ll have to work really hard…

Who is Watching Them?

Throughout watching the film, I’ve been wondering who had been watching the prisoners. Like how do they know that they have been keeping an item from the platform or not? The administration?

Because I feel like there is a greater evil behind this story since even Imoguiri worked under the administration and even she had been lied to.

Adding on to the fact that there are 666 people because there are a total of 333 levels with two people on each floor. This administration is obviously something nonethical or possibly satanic (evil)…

The hole and suffering being a representation of ‘hell’. As everyone was granted something from entering the hole in the first place.

Which seems more like blackmail than actually granting that person a certain wish, because they are ‘cheating’ life. Like curing cancer, escaping a death penalty, or even receiving a college diploma.

Possible Solutions to ‘the hole’

Many viewers mentioned how each person in the hole had ordered one specific dish, like Goreng and his escargot (snails).

So every person had ONLY consumed what they had ordered, maybe all of the chaos wouldn’t have happened. But ultimately it all depends on having “good” cooperation with others higher and lower levels than you.

Thank you so much for reading! Comment down below your thoughts on the movie or any other theories you had on the film.