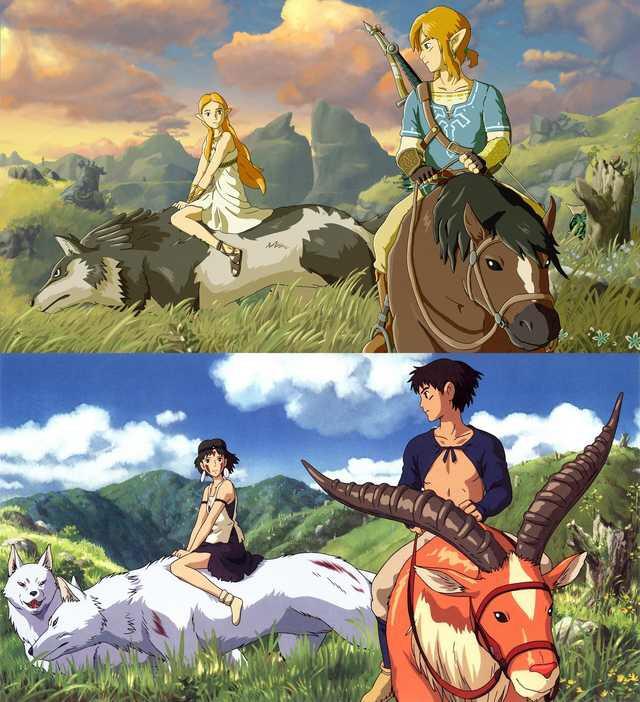 Studio Ghibli is an iconic Japanese animation studio, that clearly knows how to make an impact on its audience. It’s no wonder why it’s such a big inspiration for many other creators too.

Developing even more fascinating and intricate storytelling techniques in their own games. With the influence that Studio Ghibli has, what film or game producer hasn’t been inspired by it.

Here are two games (you may recognize) where the creators of the games felt deeply connected to the stories in Studio Ghibli:

Legend of Zelda: Breath of the Wild

Created by Eiji Aonuma from Nintendo in 2017 was inspired by 1997 Princess Mononoke.

First off, has anyone ever noticed how similar Link and Ashitaka are? From the character design to personality traits portrayed in each character.

Both wearing similar blue outfits, riding elks, and shooting arrows. There’s even a section in Legend of Zelda: Breath of the Wild, where Link can actually wear the almost exact clothes that Ashitaka wears.

Additionally, the original soundtrack of Legend of Zelda: Breath of the Wild, alone, is quite beautiful by itself. But after hearing it a couple of times, you begin to realize that the music sounds very familiar.

Here take a listen at the original soundtrack of both series:

The Legend of Zelda: Breath of the Wild OST- Life in Ruins:

Created by Dennis Talajic from Tarsier Studios in 2017 was inspired by 2001 Spirited Away.

Firstly, Dennis Talajic, himself, has mentioned various times that he had been inspired by many Studio Ghibli films prior to creating Little Nightmares, especially with Spirited Away.

Both sharing a theme on gluttony or overeating, turning you into a monstrous creature as punishment. Originally Dennis wanted to name the game “Hunger” but thought it might give too much of the game away, so instead, he went with “Little Nightmares”.

Leaving the audience to discover the meaning of the game as they play for a more shocking and surreal moment.

I’d also like to make a point that Chiro and Six are also very similar. Both are relatively young girls, who are very curious and naive, yet strong… However, Six takes things a bit too extreme, while Chihiro is more innocent and caring.

I believe that one chase scene where Six is being chased by the “monsters” on the ship best resembles the chase scene between Chihiro and No Face.

Also, another character in the game, the Craftsman (or toymaker) looks very similar to Kamaji. Maybe even too similar, as they both have the same elongated arms and small googles.

It’s no coincidence that these games share so many similarities to the Studio Ghibli franchises. However, each medium has successfully created a story that will be remembered for years to come.

Thank you so much for reading! Comment down below your thoughts on this theory or other games I may have missed.